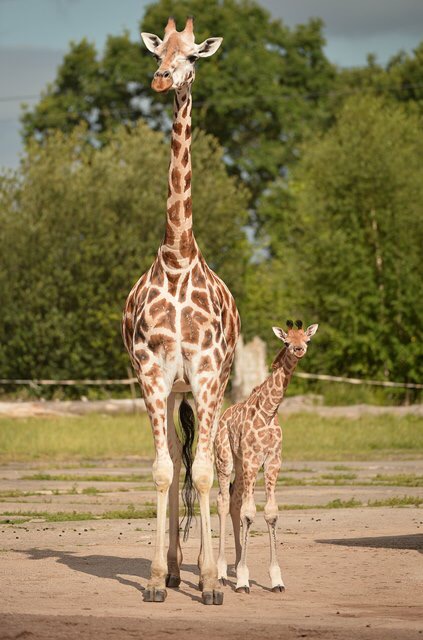 The leggy newcomer strode into the sunshine with mum Orla, dad Meru and the rest of the herd for his first outdoor appearance since arriving on Thursday 23 July.
Kidepo is the most recent addition to the ‘baby boom’ of rare Rothschilds’s giraffes at the zoo, following on from the births of Zahra in December 2014 and Sanyu in June. Their arrivals have given an important boost to the European-wide breeding programme for the species, which is classed as endangered by the International Union for the Conservation of Nature (IUCN).

Once wide-ranging across Kenya, Uganda and Sudan, the Rothschild’s giraffe has been almost totally eliminated as a result of habitat loss and hunting for their meat and now only survives in small, isolated populations. Current research suggests that fewer than 1,100 are now left in the wild – making them one of the most endangered subspecies of giraffe in the world.

As well its successful breeding programme, Chester Zoo also supports vital projects in the wild, including the first ever scientific review of the species, with the aim of developing a long-term conservation strategy for the animals in Africa.

A lofty arrival at Chester Zoo