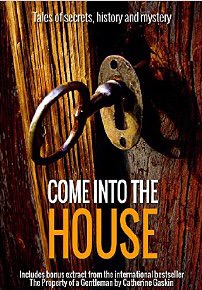 An anthology of new writing celebrating the “secrets, history and mystery” of historic houses has been published

These ten tales are the short-listed entries from a competition, run by Corazon Books in partnership with The HIstoric Houses Association to write a short story either inspired by or set in a historic house.
Readers can witness the devastation caused by an ambitious spark at the baker’s house on Pudding Lane which turned into the Great Fire of London; or eaves drop on a conversation between an old woman and Dracula sitting on a bench opposite Bram Stoker’s home in Dublin; or there is a story of a woman mesmerised by trompe l’oeil; and another of visitors who are shown around a stately home, where one person disagrees with the stories spun by the tour guide.
The competition’s unique prizes were in keeping with this theme. The overall winner, Kathryn Burke of Dublin, received double Friends membership for the Historic Houses Association, and she and her sister Camilla were treated to afternoon tea and a private tour of HHA property Levens Hall in Cumbria, home of Naomi and Richard Bagot.
Kathryn Burke says of her story Sunday in the Park with the Vampire: “I live in Dublin and often sit in the tranquil park which faces Bram Stoker’s childhood home. The contrast between the formal elegance of the houses in the Crescent, where Stoker lived, and the wild creature which would one day be conjured by Bram’s imagination, intrigued me.”
On her visit to Levens Hall, Kathryn said: “I really enjoyed visiting Levens Hall. It fired my imagination as I’m developing a novella and the central section will be set in Elizabethan England and I hope Naomi and Richard will not mind if I borrow a casement or two for my story. As a writer I am a robber and I might even steal a Levens ghost as well, if they let me get away with it. Such a fantastic place begs to be used as a source of inspiration.”
Ian Skillicorn, publisher of Corazon Books, says: “We were looking for compelling tales with lots of atmosphere that took place in the past or present, in either a real or fictional setting. The short-listed entrants all took us on imaginative journeys through time and place, and encompassed a wide range of characters and emotions. I’m sure you’ll enjoy reading these inventive and entertaining stories as much as the judges did.”

Nick Way, Director General of Historic Houses Association, says “The Historic Houses Association is delighted to have partnered with Corazon Books in this competition. Many of our Members’ properties have inspired great works of literature for centuries and continue to stir visitors’ imaginations today. 13 million people a year visit HHA Member properties to escape the routine of their lives, and these imaginative short stories will transport the reader with tales of their secrets, history and mystery.”

Come into the House is published by Corazon Books and is available as a paperback and e-book exclusively from Amazon here.