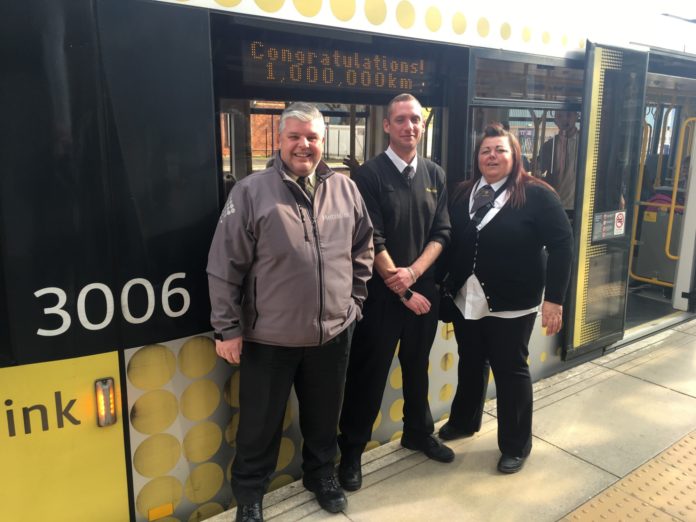 It’s one million not out for Metrolink today as the 3006 tram became the first to clock up a landmark distance.

The vehicle, which was first introduced to the network in February 2010, moved into seven figures worth of kilometres this afternoon as it pulled into Altrincham.

The occasion was marked with a special message from the driver Ady Leigh as well as a celebratory one-off message on the vehicle’s electronic display.

It takes the total distance travelled by the current 120-tram Metrolink fleet to over 73.5 million km, which is the equivalent of just under 6000 full journeys around planet Earth.

Metrolink is one of the most sustainable and environmentally-friendly ways to get around Greater Manchester; trams emit no harmful emissions and are powered by renewable and green energy sources – which is vitally important as the city-region looks to clean-up the air we breathe. Each tram can carry over 200 passengers – equal to nearly three double-decker buses – and uses far less fuel per passenger than cars or buses.

Chair of the Transport for Greater Manchester Committee, Councillor Mark Aldred, said: “This was a nice landmark to reach and is testament to the popularity and expansion of Metrolink.

“I’d like to use this opportunity to personally pay tribute to the unseen work carried out by the maintenance teams at KeolisAmey Metrolink, which is absolutely paramount in enabling them to provide the best service possible to the many thousands of people who travel with Metrolink on a daily basis.

“A thank you must also go to our passengers who use the network on a daily basis.

“It’s more important than ever that we have a modern, reliable network if we’re to encourage more people to leave their cars at home and use public transport as part of the work we are doing to tackle poor air quality – the biggest public environmental health issue facing us today.”

Brian Rowbotham, Trafford Depot Workshop Manager for operator KeolisAmey Metrolink (KAM) said: “At KAM, we are committed to delivering operational excellence every day by putting customers at the heart of everything we do. Tram 3006 has reached this one million kilometre milestone thanks to the hard work of our maintenance teams to improve how well our trams operate. Keeping our tram fleet in peak condition ensures we continue to deliver our vision of keeping Greater Manchester moving and growing every day.”

The M5000 model, manufactured by Bombardier, was first introduced to the network in December 2009 and eventually phased out the older T68 vehicles, with the last one being taken out of service in 2014.

Living life to the fullest