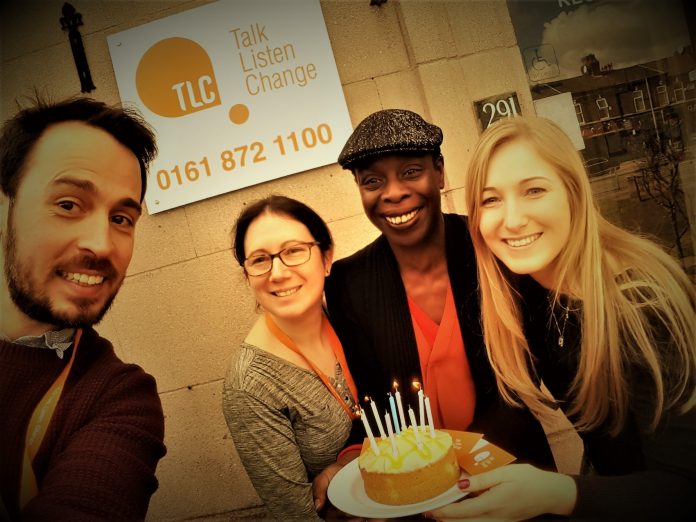 A Greater Manchester charity set up in the 80s and now supports 13,500 people is celebrating its first birthday as a new organisation with a charity ball.

After doubling in size in just three years, the charity disaffiliated from a national organisation in April 2017 and went independent – TLC: Talk, Listen, Change emerged. The charity offers services from counselling to family mediation, parenting support and domestic violence prevention.

A year in, latest research shows 94% of people who’ve used their services would recommend to those in need, 100% families report feel less isolated and they have seen a 211% reduction on police callouts.

In its first month, TLC stepped in to provide support to those affected by the Manchester arena bombing on May 22 delivering more than 200 sessions of free support to those in need, such as counselling for children who were at the concert, teachers who needed to comfort their students and emergency service workers who were first on the scene.
CEO Michelle Hill, who was awarded “Highly Commended CEO of the Year” by the Inaugural North West Charity Awards 2017, urged people to get in touch with TLC at the time.

Today, she said: “We’ve only been going a year but have already had a massive impact on people in Greater Manchester. We are proud to be a pragmatic charity who can take an innovative approach – allowing us to support individuals, couples and communities in a very real way.”

To share their approach and celebrate making it through the first year as a new organisation, TLC is hosting a Charity Ball at Victoria Warehouse on April 27. The event is being sponsored by Shoosmiths LLP, a partnership arranged within their Manchester branch, by Anita Shepherd, senior associate and head of the family department.
Victoria Hill, event coordinator, said: “I’ve known Anita (Shoosmiths LLP) for a number of years and always admired her determination to offer high-quality support to her clients. Shoosmiths LLP’s belief in the support we offer to individuals, couples, friends, families, parents and throughout society has led to a natural partnership and we’re really grateful for their sponsorship of TLC’s Charity Ball. They have enabled us to plan a fabulous evening where all profits go directly to the charity.”

The Charity Ball is being held at Victoria Warehouse on 27th April 2018, tickets on sale now through Victoria Hill at TLC: Talk, Listen, Change.

Heart FM’s Russ Morris will be hosting the event.