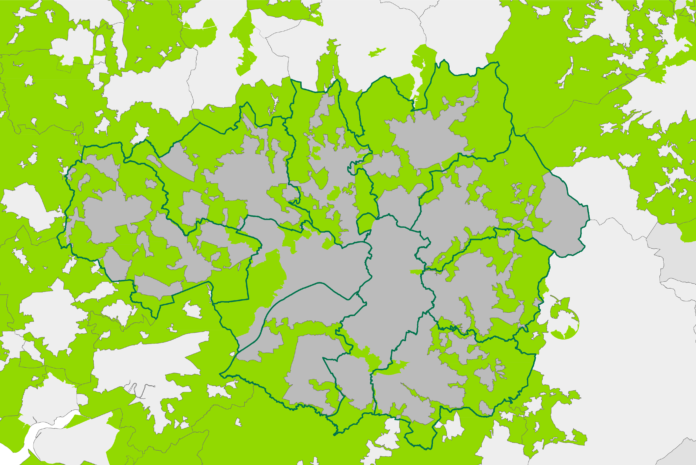 GREATER Manchester leaders have today published the final draft of the city-region’s wide-ranging Plan for Homes, Jobs and the Environment, the Spatial Framework.

The plan, developed by all 10 boroughs and the Greater Manchester Combined Authority (GMCA), sets out how the city-region will build the right homes in the right places so everyone can live in environmentally sustainable villages, towns and cities connected by a fully integrated, high-capacity transport system.

The plan will now be discussed by Greater Manchester leaders on Friday 30 October. If endorsed, elected councillors from across the city-region will then have the opportunity to scrutinise the plans through November, and if approved by all 10 districts the plan will go out for an eight-week public consultation, beginning Tuesday 1 December.

The first draft of the Spatial Framework, published in 2016, saw more than 27,000 residents in Greater Manchester provide feedback, while a second round of consultation received 17,000 responses from people, businesses and community organisations.

To support this approach, Greater Manchester was allocated £81.1m from the Government’s Brownfield Housing Fund to unlock brownfield sites for development. Twenty-four schemes have now been identified to benefit from the first tranche of the five-year funding allocation, delivering 4,353 homes across sites in all 10 boroughs. In total, a minimum of 5,500 homes on brownfied sites will be delivered through this funding.

“Since the first draft went out to consultation in 2016 you have responded in your thousands, and we have listened. This final draft has seen plans for green belt sites cut by 60 per cent, with a focus on bringing forward brownfield development wherever possible. Our plans will protect our most important natural areas, deliver a sustainable travel network, and guard our boroughs from the risk of unplanned development.

“While we continue to confront the coronavirus pandemic, we also have a duty to look ahead and make sure our city-region builds back better for our people and places. The Spatial Framework is about making sure our city-region leads the way in providing good jobs, good housing, and tackling the climate crisis. The plan we’re publishing today will be the blueprint for how Greater Manchester faces the future together.”

City Mayor of Salford Paul Dennett, GMCA Lead for Housing, Homelessness and Infrastructure, said: “This plan represents a shared vision for Greater Manchester, and it’s by working together across the city-region that we’ve been able to direct development to the most sustainable brownfield areas – primarily the cities and town centres – and minimise development on green belt as much as possible. We’ll be delivering almost 4,500 homes across Greater Manchester with the first tranche of funding from the Government’s Brownfield Housing Fund, and over the next five years will need to deliver a minimum of 5,500 throughout our city-region.

“We’re committed to building high-quality affordable homes for our residents, but we don’t want to build any new homes that aren’t fit for a low-carbon future. The Spatial Framework will require all new development to be net-zero carbon by 2028, and all new developments will either be served by our existing transport network or connected by new infrastructure.”

A group of Manchester’s business leaders launch group to get the City back on...

Permanent Memorial for the victims of Arena attack is planned