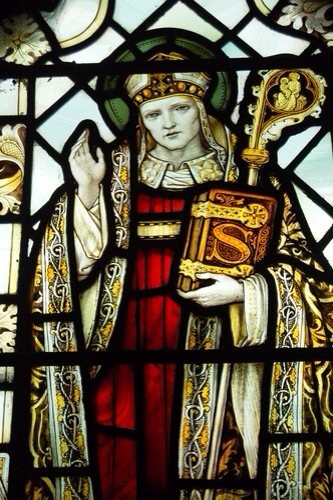 People will be watching the skies today hoping for no rain clouds as they take note of the St Swithun’s Day legend which dates back to the 14th century.

The Saint himself, an Anglo-Saxon bishop of Winchester lived five hundred years earlier.He died around AD862 after a life dedicated to charitable giving and requested that his remains be interred among the ordinary people outside the church.

Just over a hundred years later he was made patron saint of Winchester Cathedral and his body was dug up and moved to a new indoor shrine. However a terrible downpour struck the church as a higher authority signalled its displeasure at the internment which continued unabated for forty days.

Only one miracle is attributed to Swithin while he was alive. An old lady’s eggs had been smashed by workmen building a church. Swithin picked the broken eggs up and, it is said, they miraculously became whole again.

As for the weather prediction it is probably our most famous meteorological saying unfortunately, at least according to the Met office had little basis in fact

“Since records began, not a single 40-day drought has occurred anywhere in the UK during the summer months, and there has been not one instance at any time of the year of 40 consecutive days of rainfall. Sunshine on St Swithun’s Day in Miami may well auger 40 days of unbroken sunshine, but in Blackpool it most assuredly does not.”

Beam me up Scotty and solar power the norm for 2025