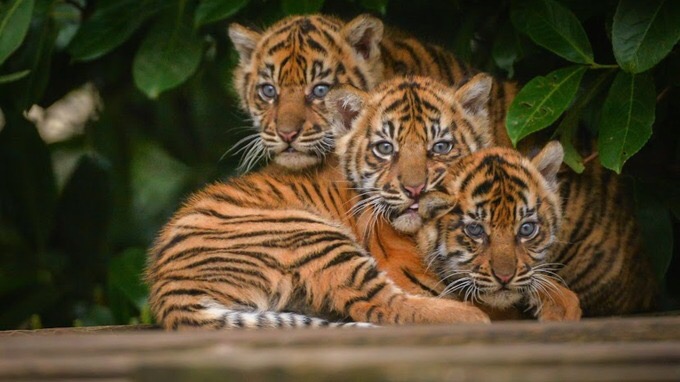 The cubs, born in January to mum Kirana and dad Fabi, were found to be two males and one female.

Gabby Drake, vet at Chester Zoo, said the trio are in tip-top shape.”
Sumatran tigers are found only on the Indonesian island of Sumatra. They are the smallest of all tigers and have the narrowest stripes.

Critically endangered in the wild, there are believed to be just 300-400 Sumatran tigers left as they are often targeted by poachers who use their body parts as traditional medicine. Much of their jungle habitat has also been destroyed.

Chester Zoo’s Sumatran tigers are part of the European Endangered Species Breeding Programme. The zoo works closely with other zoos on conservation breeding projects to try and ensure the ongoing survival of the species

In June 2015, the zoo’s tigers will move to a brand new exhibit when Islands, the biggest development in UK zoo history, opens. Islands will recreate habitats from Panay, Papua, Bali, Sumatra, Sumba and Sulawesi and showcase species such Sumatran orangutans, cassowary and Sunda gharial crocodiles, as well as Sumatran tigers. Unlike anything else in the UK, it will show animals in an even more naturalistic setting than ever before, which the zoo hopes will see visitors make more of an emotional connection with them. If people care about a species they’re more likely to help save them

The four horseman of the Apocolypse