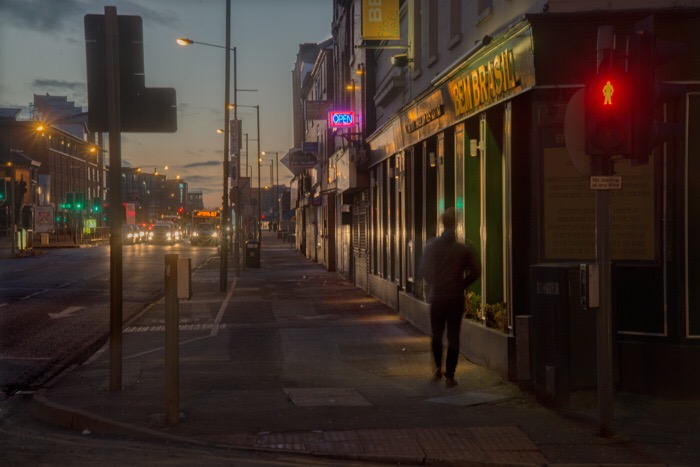 Simon Buckley is a photographer living in the Northern Quarter. He recently  began a long term project, Not Quite Light, capturing in the half light of dawn the evolving northern edge of Manchester City centre. Below he tells us what inspired him to begin the work, and start up a blog featuring his pictures and stories of the people and places he encounters whilst out working.

Before us is a city where, it’s often said, we do things differently, one of them being that we apparently take an approach to architectural planning that was conceived whilst considering what to do with a pile of left over Lego bricks. 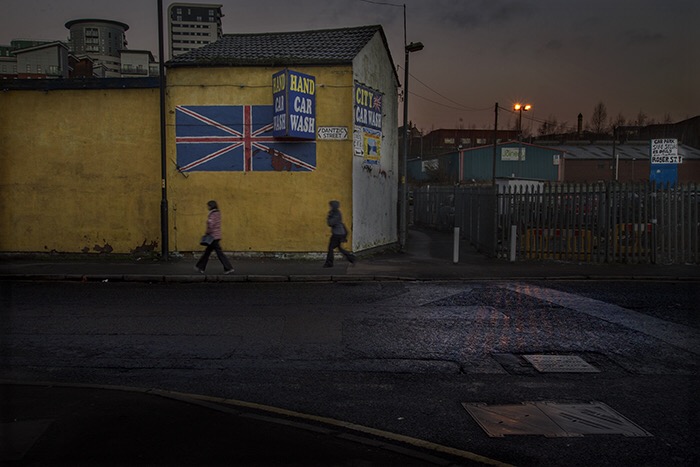 On the northern edge of its centre, we can see Victorian glories collide with the unsentimental drive to modernise and reacquaint the city with modern economic triumph. Often, the destruction and construction seem ill-thought out.

Car parks lie, like dried up lakes where once grand brick buildings of industry stood, and the idea of the new age soothing the injured past seems an impossible thought, despite the glistening lights of recent architecture.

It appears that the council’s policy is to establish the city centre as the focal point for growth, hoping that the new prosperity seeps northwards like ink on blotting paper. However, as the city undergoes its transition, it often feels to me as if Swan Street and Great Ancoats Street act as a tarmac moat, and that very little wealth has managed to make it across to the north side.

Immediately beyond the boundary of the city centre much of the land is still to be touched by the gilded hands of our Midas politicians. SIP and NPC are the now the names to dominate the landscape here, rather than Arkwright and Fairburn. 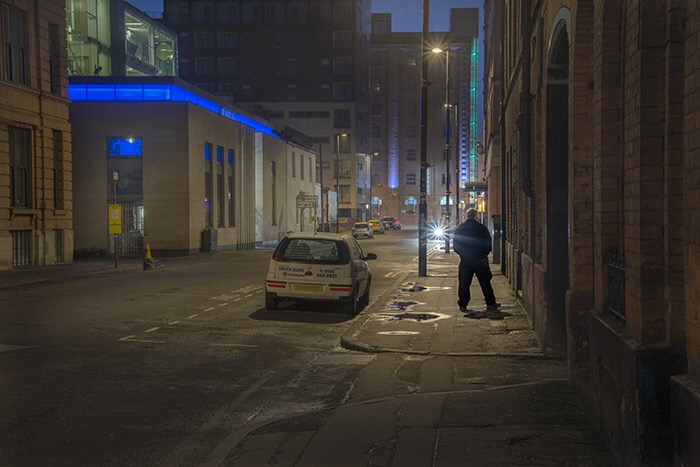 The jagged juxtaposition of architecture, of demolition and restitution fascinates me and, as I’ve been a photographer for most of my working life, I’ve been inspired to explore the area in which I live with my camera. Manchester is going through a great transition, and I want to examine how it’s managing the heritage of its past ambition as it embraces the ambitions of today.

I felt, therefore, that I had to photograph in the half light of dawn, to enhance the sense of transition. It’s also a magical time of day. As a child, a wardrobe in a darkened room could take on the personality of a monster and the buildings in the half light certainly adopt a different, more monumental persona.

Also people out on the street at dawn, probably on their way to work, behave differently. There’s a sense of isolation, they’re faces are tense, resisting eye contact, and they’re hunched as they scurry past, just as Lowry saw them.

I only have around 35 minutes to work in each morning, before the light lifts and the street lights pop off, as if the electric meter has just ran out. But in this time I feel joy at the world around me, with its strange half-lit beauty. And I also encounter others existing in the extreme of the day. People such as Mike, a mechanic near Angel Meadow, who has worked under the railway arches for 35 years. Or Carl, an ex-fireman now doing a night time security shift. Or the man outside Creamline Dairies on Redbank who asked me if I was looking for the rarest bird when he saw me taking pictures at dawn.

I’ve set the boundaries for the project, between the 2 great places of transit and restoration, Manchester Piccadilly and Manchester Victoria, and so I have a large area to cover and it’s likely that I’ll be getting up early for some months.

Slowly, I’m becoming the child addicted to climbing through the back of the wardrobe into Narnia, and the rest of the day doesn’t hold my attention as it once did. I could keep photographing the change in Manchester until I die, and so all I seek to do is capture this area of the city as it is on the day that the image is created.

Simon Buckley has been a photographer for over 20 years, working for magazines such as Elle, Saturday Telegraph Magazine and Der Spiegel.

Follow his work on the blog Not Quite Light ( https://notquitelight.wordpress.com/ ), which is updated several times a week, and on Twitter @NotQuiteLight