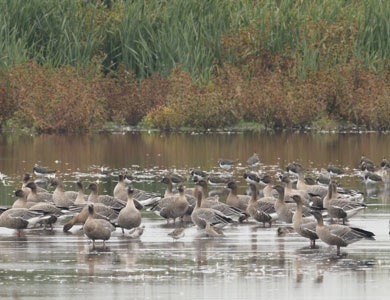 Over 30,000 Pink-footed geese have arrived at WWT Martin Mere Wetland Centre making this one of the best wildlife spectacles in the North West over the next few weeks.
Reserve Manager, Tom Clare, said: “Autumn is one of the best times to visit WWT Martin Mere. We have had 30,000 using the reserve this week with reports of large numbers still in Iceland and Scotland due to this warmer weather we have had recently, so there is a good chance of us having large numbers for the next few weeks.”

But how do they get here? Many of us will see and hear the familiar sound at this time of year of the geese calling overhead in a V formation. Pink-footed geese will remain in this formation throughout the 500 mile journey from Iceland with the senior geese taking it in turns to lead the group whilst the youngsters follow.

The older geese will recognize landmarks to help guide them to WWT Martin Mere and the surrounding area, both natural guides such as the Ribble Estuary and Morecambe Bay, and man-made structures such as the M6.
The geese will stay in this area for as long as they have food which is often grain on local fields. Ultimately they will move on to spend the winter in Norfolk when WWT Martin Mere can expect thousands of Whooper swans to start arriving at the centre for the winter.
Over the last 30 years, there has been a massive increase in the number of geese travelling through Lancashire and North West, which will often get 25% of the Icelandic population of Pink-feet (approximately 100,000). WWT Martin Mere had a record number of geese arrive in 2014 with 45,800 of them roosting on site and there is still time to beat this existing record over the next couple of weeks.
The centre is also offering special access to allow visitors to see the geese at dawn and dusk. From 23 September, the Martin Mere reserve will be opening late until 7pm every Wednesday and Saturday to allow visitors to see the spectacle of thousands of geese come into roost which is often later in the day.

Dawn flight events are also taking place every Saturday morning in October to come in from 7am to see the geese as they wake at Dawn. The dawn flight events require booking in advance by calling 01704 895181.

One of the world’s rarest turtles has hatched at Chester Zoo.