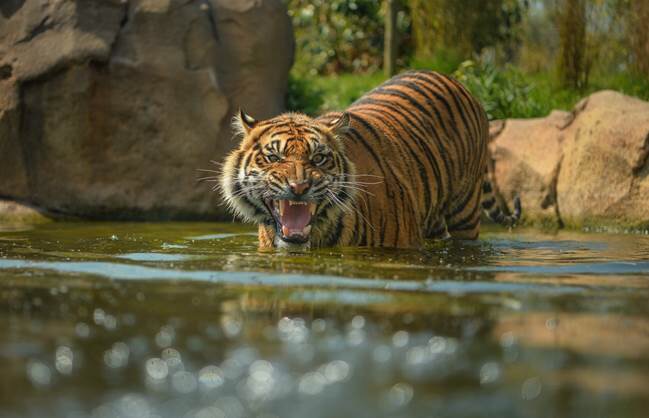 New figures have revealed that Chester Zoo has attracted more than one million visitors so far in 2016 – the earliest it has reached the milestone in its 85 year history.
The zoo hit the landmark on 29 July, over two weeks ahead of its previous record, which was set just last year on 15 August.

Meanwhile, latest figures released by VisitBritain have also named the zoo as Britain’s most visited ‘paid for’ attraction outside of London, with over 1.5 million visits last year.

Zoo bosses have put its popularity down to the opening of its £40m Islands habitat – the biggest expansion in UK zoo history – and the Channel 4 TV documentary series, The Secret Life of The Zoo.

“To top the list as Britain’s most visited paid for attraction outside of London in 2015 and to beat all of our previous records and reach one million visitors so early in 2016 is an incredible achievement. It’s an absolute credit to the staff that make the zoo such a wonderful place for our visitors to enjoy.

“Our Islands habitat – a huge new zone focussed on species from South East Asian islands – is flourishing and the animals are settling in well, with lots of new arrivals. Islands is a real game-changer for zoos in the UK and we have more exciting developments in the pipeline. A Channel 4 documentary series about the zoo, The Secret Life of The Zoo, has also proved to be incredibly popular, highlighting the amazing conservation work going on behind-the-scenes and the incredible bonds our keepers have with some of the world’s rarest animals.

“As a conservation and education charity, our visitors help us fund 80 different projects that are actively working to protect hundreds of threatened species around the world. It’s just great to see that more and more people each year are becoming increasingly aware of the importance of wildlife conservation.”

The zoo was also named the best zoological attraction in the UK last year by users of the travel website, TripAdvisor.

Clash of the Toon Titans