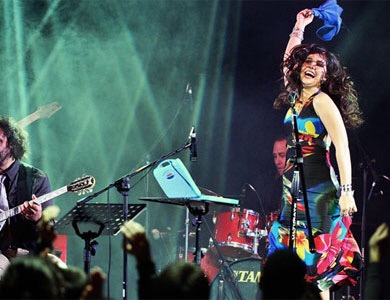 Lancaster Music Festival is set place to take this week, from Thursday 8th to Monday 12th October.
Having been shortlisted for a Lancashire Tourism Award for the third year running, this year sees a host of innovations including a festival mobile app, a relaunched website, a new festival ale, city centre camping for those who like the festival-in-a-field atmosphere and a whole raft of new venues, some of which are putting on live music for the first time.
Across the city of Lancaster preparations are in full swing for the seventh edition of the city’s Welcoming, Walkable, Wonderful Music Festival taking place from Thursday to Monday, known locally as Lancaster’s unofficial bank holiday weekend.

Last year saw upwards of forty thousand visitors boosting the local economy by over a million pounds and this year promises to be bigger than ever. More than forty venues will host over three hundred performances from Local, National and International acts across a myriad of different genres. From Funk to Folk, Punk to Pop and many more genres too numerous to mention. If you can’t find music that you like, you probably don’t like music.

This year sees a host of innovations being brought in by the festival organisers – a festival app, a relaunched website, a new festival ale, camping for those who like the festival-in-a-field atmosphere and a whole raft of new venues, some of which are putting on live music for the first time.

Local developers and major Festival sponsors All Apped Up have provided a brand new festival mobile app. Available for free for both iPhone and Android devices, the app will have the most up to date information on all the performances, bands and venues for the whole festival together with clear information to help festival-goers navigate around venues.

Festival Coordinator, Ben Ruth says “As the Festival has grown year on year and attracted more and more visitors from outside the immediate area we’ve seen a real need to keep people fully informed whilst on the move. All Apped Up have done a sterling job in bringing this new app to life and we’re eternally great full for their hard work”.

Also on board for the first time is Lancaster Brewery who invited the Festival Team to help with the design of this year’s festival ale. Described as being jolly, frothy and a bit nutty (the ale, that is) you can find it on sale at the majority of the licensed venues.

Ben Ruth commented, “The whole ethos of the festival has always been to highlight the best of this fantastic city of ours, whether it be the music, the pubs, the fantastic outdoor spaces and to promote local businesses. We’ve been looking to work with Lancaster Brewery for some time and I’m delighted that this has finally come about. I’m also rather excited about sampling the fruits of our labours”

For the first time, festival-goers will have the opportunity to stay under canvas close to all the action courtesy of Lancaster Cricket Club. There will be both grass and hard standing pitches available together with showers and a clubhouse all just a few minutes walk from Lancaster Castle, the Quay and all the other city centre venues. Lancaster Cricket Club Chairman Brendan Hetherington says “Lancaster Music Festival is a superb weekend that lifts the revenue and profile of the city and as such we are delighted to be involved. We are just over the hill from the castle and have the ability to host tents, caravans and motor homes with camping facilities, a bar and function room for jamming sessions and breakfasts in the morning.”
As the festival grows, more and more unusual venues have signed up to bring you a wider choice of acts than ever. This year has seen an expansion in Church Street where new venues Squires Snooker Club and The Crafty Scholar have joined existing venues The Sun Hotel, The Study Rooms and The Stonewell Tavern. Also new this year are The Royal Kings Arms, The Juke Joint, Apothecary and two of Lancaster’s most iconic buildings The Assembly Rooms and The Ashton Memorial.
Outdoors, as well acts taking place in the established Market Square, Sun Square and Dalton Square, More Music Morecambe will be hosting International acts outside the Judges Lodgings on Sunday.
In amongst all these new initiatives some things still remain the same. The weather will, of course, be perfect, the city will come alive with joyous camaraderie and for the third year running the Music Festival has been shortlisted for the Lancashire Tourism Awards. Whether the weather holds, we’ll know next week. Whether it’s an award-winner we’ll have to wait until the awards ceremony on 5th November.

Full details of all the events together with comprehensive information on all the headline acts can be found in the Festival brochure. Running to ninety pages and priced at just 1 pound, this is available at all venues together with the Tourist Information Centres in both Lancaster and Morecambe.

You can also keep in touch with the Festival via the website lancastermusicfestival.com, on Facebook facebook.com/LancasterMusicFest or on Twitter twitter.com/LancsMusicFest. Better still, download the app to keep up to date while on the move.