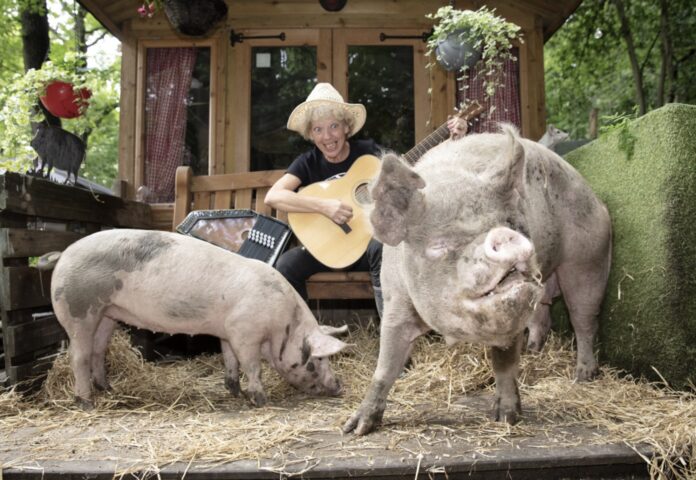 This month, hundreds of music and pig lovers will come together to experience The Orchard Pig Gig – the UK’s only music gig for pigs that supports the protection of abused and abandoned pigs in the UK – literally saving their bacon.

Music-loving pigs, who are said to enjoy jazz, rap and classical music, will be free to roam, dance and snout to the sounds of the popular two-day musical extravaganza held on 31 July and 1 August. The weekend will be full of live local music, local culinary vegan delights and a pigging good time, nestled amongst 10 acres of woodland in Huddersfield.

The Orchard Pig Gig, was driven by a partnership between Orchard Pig, the 100% vegan cider, and Pigs in the Woods, a not for profit vegan sanctuary that rescues and rehomes pigs. With no current UK legislation to protect pigs as pets and a lack of education around ‘micro pigs’, many Brits have been duped into purchasing a miniature pet pig, despite no such breed as a ‘Mini’ or ‘Micro’ or ‘Teacup’ existing.

This common misconception has meant that hundreds of pigs, who eventually grow to their destined larger size, have been left abandoned, in desperate need of a home but often end up in the slaughterhouse.

The Orchard Pig Gig aims to raise funds to support the Pigs in the Woods sanctuary and, more importantly, to drive awareness around the growing number of abused and mistreated pigs that deserve a better life and a forever home.

Due to popular demand, Orchard Pig will be giving the public a chance to hog tickets to the festival on its social media channels. A limited number of tickets at £22.00 are still available for sale on See Tickets. All sales go towards supporting the sanctuary for pigs.

Russell Haggata, Operations director and Chairman at Pigs in The Wood, said, “Our pigs are one of a kind and love to socialise and dance to music. They can’t wait for this year’s Orchard Pig Gig. Our sanctuary wouldn’t exist without the generosity of donations, and we’re aiming to raise over £50,000 to improve the facilities for our pigs, so that everyone can experience the joy these animals can bring.”

Emily Gray, Brand Manager at Orchard Pig added, “Our mantra is to go pig or go home and what better way to do that than to host the world’s first gig for pigs – putting on an amazing show while supporting the wonderful team at Pigs in the Woods. Just like people, pigs deserve a home, and we believe they also deserve to party. It’s what makes this partnership so exciting; we’re helping to drive awareness and protection of these fabulous animals, but we’re also giving them the chance to get down and boogie at the same time.”

As a proud sponsor of the gig, Orchard Pig will be offering its range of delicious ciders to visitors, including the crisp and refreshing Reveller, the sweet yet dry  Truffler, and the one and only pig daddy, the Hogfather.

Donate to Pigs in The Wood refurb project here.

New music and a Manchester Date for Jake Bugg