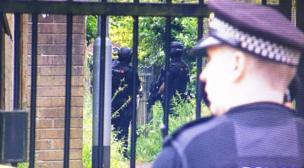 The siege at a property in Shaw came to an end just before 5.00 am this morning with the hostage being released without harm and a man detained by police

The siege started shortly before 3:15am yesterday when police were called to reports that a man armed with a gun had locked himself inside the property, along with a woman and two children.

Police are now ensuring the area as safe and will shortly begin returning people to their homes.

GMP’s Chief Superintendent John O’Hare ‎said: “We would like to thank the local community in particular those who have had to leave their homes whilst we worked to resolve this situation.

“Thankfully the hostage situation was safely resolved and the woman was brought to safety and the man arrested.”

Police negotiators had  been at the scene continuing to engage with the man who had been named locally as Marc Schofield and attempt to bring the situation to a safe resolution, as a woman also named locally as Lisa Hurley had remained inside the property.

Jailed for eight and a half years for arson attack