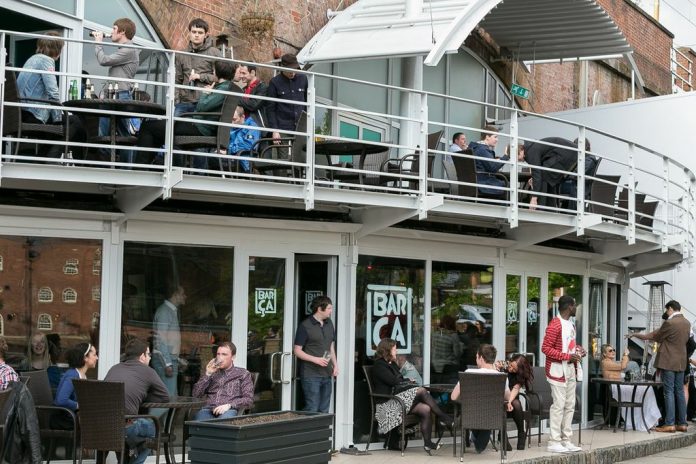 A man in his thirties is in hospital with life changing injuries after being attacked with a machete outside a Manchester bar yesterday evening.

The man had been at Barca Club in Castlefield with his friends and had gone outside when another man walked past him and shouted abuse at a group of people.

When the victim asked the him to calm down, the offender turned to his friend and asked for the machete.

His friend brought over a backpack, which the offender pulled the machete out of, before turning and striking the victim’s hand with it.

The man was taken to hospital where he is still being treated for life-changing injuries.

The three offenders fled from the scene on foot and with a push bike.

General Manager of Barca Harry Slater told About Manchester that the bar is cooperating fully with the police in their investigation and have supplied CCTV footage to help find the people behind this attack.

Detective Inspector Mark Davis of GMP’s City of Manchester Division, said: “This man should be enjoying the rest of a well-earned weekend, instead he’s in hospital being treated for injuries that will change his life.

“The way the offender pulled the machete out and brutally struck this innocent man without hesitation is chilling, and we will do everything we can to find the person responsible.

“If you were around Castlefield last night and saw either the assault, or know something that could help with our enquiries, please contact police and share this with us.”

Anyone with information is asked to contact police on 101 quoting incident number 2196 of 16/03/18. Any report can be made anonymously through the independent charity Crimestoppers on 0800 555 111.