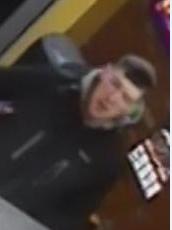 Police have released images of a man they want to speak to in connection with a stabbing of a taxi driver in Moss Side at the weekend.

The 42-year-old man was stabbed multiple times on Ruskin Avenue.
He was taken to hospital and remains there for treatment but his injuries are not believed to be life threatening.

Enquiries have established the driver had picked up a man on Dickenson Road, Longsight before driving to Ruskin Avenue.

The customer started arguing over the cost of the fare before he repeatedly stabbed the driver. He then fled the scene leaving him seriously injured.

Officers have now released pictures of a man they want to speak to in connection with this incident.

Detective Inspector Geoff Machent, of GMP’s City of Manchester team, said: “As we continue to investigate this brutal attack, our thoughts remain with the taxi driver as he recovers in hospital.

“We are continuing to follow extensive lines of enquiry and are particularly keen to speak to the man pictured in connection with this attack.

”If you saw the man pictured in the area around the time of the offence, or have any information about him, then please get in touch.”