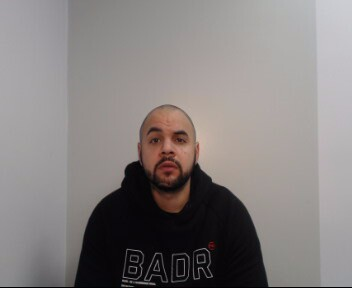 man who threatened shop assistants with a knife, has been jailed for a series of robberies in Stockport.

Paul Rekia aged 33 of Gorton Road in Stockport, has been sentenced to seven years in prison for three knife-point robberies in Stockport.

The first robbery took place on Saturday January 2 when a staff member who was working behind the till at the Go Local store on Gorton Road in Reddish, when Rekia entered the store and headed straight behind the counter.

Rekia grabbed the staff member around the neck, held a knife to him, and demanded that the till be opened. He took an amount of cash, and then turned his attention to the cigarette cabinet. He then filled a black plastic bag with cigarette packets, before leaving the store.

A few weeks later, just before 20:30 on Sunday 31 January 2021, Rekia entered the same store and picked up a bag of sweets before approaching the same staff member who was stood behind the counter. After a brief conversation in which Rekia tried to convince the staff member to buy some crates of beer, Rekia became agitated, pulled out a knife, jumped over the counter and demanded that the staff member open the till.

Both incidents were captured on in store CCTV footage. Rekia wore a hood and mask during both robberies, but also wore the same dark jogging bottoms and black and white Nike Trainers. Recognisable tattoos on Rekia’s hands were also visible, and helped identify him to Detective Constable Robert Shakespeare, who reviewed the footage. He recognised Rekia as the offender, as he has spent 14 years working in the Stockport area, and Rekia was known to him.

The third incident took place only days later, on Friday 5 February at an off-licence also on Gorton Road. Rekia and an unknown male entered the store where a female staff member was working, joined by two friends. The unknown man ran around the counter and began pulling cigarettes from the display, before demanded that she open the till.

Rekia, seen wearing the same black and white Nike Trainers, with the same tattoos visible, pushed the two friends of the female staff member into a room at the rear, brandishing a knife again. He then returned to the front of the store, and picked up a bottle of alcohol, before both left

Detective Constable Robert Shakespeare said: “This was a shocking series of knife point robberies in a short space of time, where one victim was ruthlessly targeted, twice.”

“It was a terrifying ordeal for those involved, who were left very shaken, so I am pleased with today’s result.

“Crimes of this nature will not be tolerated across Greater Manchester. Our Neighbourhood policing teams have invaluable experience policing their streets and will use their extensive knowledge to ensure that anyone who takes part in this kind of criminal activity will be brought to justice.