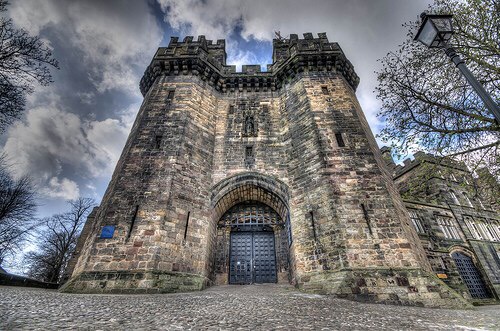 The forme A-Wing has been opened up at Lancaster Castle as part of its guided tours, with a new ‘Prison Life’ exhibition in the ground-floor cells.
This new exhibition, which opened on Monday 15 August, allows visitors to view the cells at their own pace, as part of the existing tour.Each cell focuses on a particular aspect of prison life including food, work, health, religion, recreation and punishment.

Historic artefacts are on display, supported by wall panels explaining more about the items, along with quotes from former prisoners and prison guards.

The new exhibition has been jointly funded and managed by Lancashire County Council and the Duchy of Lancaster.

County Councillor Marcus Johnstone, Lancashire County Council’s Cabinet Member for Environment, Planning and Cultural Services said: “There has always been a great deal of public interest in A-Wing, which is a traditional Pentonville-style prison, as seen in popular films and TV programmes such as Porridge.

“It was first used in the 1820s, and incorporates a panopticon, a glass atrium and 18 cells over each of its three floors. Adding this to our guided tours will allow the public to see more areas of the prison and is part of the castle’s history as a place of incarceration and imprisonment.”

Nathan Thompson, chief executive of the Duchy, said: “We promised to open up as much of the castle as possible to members of the public, residents and tourists to the city.

“This is the latest stage of us delivering on this promise and we will continue to do this as the restoration works are completed.”

To book a ticket for a guided tour, find out about opening times or for more information phone 01524 64998, email lancastercastle@lancashire.gov.uk or call in at the castle shop between 9.30am to 4.30pm.