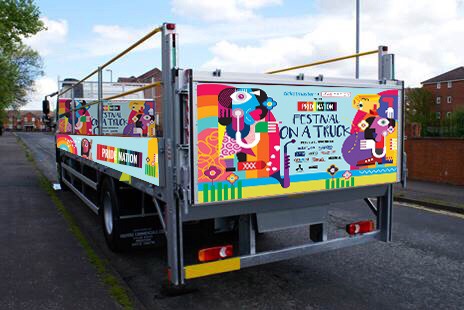 With Manchester Pride just over a week away, as well as being the main ticket agent for the event, Ticketmaster’s ‘Pride Nation,’ an Employee Resource Group (ERG) for LGBTQI employees and supporters, will present a float in the parade.

ERGs – employee led groups which act as a resource for staff – have been created globally across Live Nation Entertainment to celebrate a fair, equal and inclusive workplace. ‘Pride Nation’ celebrates the LGBTQI Community, and the London chapter is driving participation in Manchester Pride. The group has also aligned with the Opening Doors London charity, and soon The Albert Kennedy Trust, and encourages all employees to use their two days of paid volunteer work with the charities.

With The Big Weekend, one of the biggest and longest running LGBTQI celebrations in the UK upcoming, the Ticketmaster team in Manchester has been busy creating the ‘Pride Nation Float’ as their entry in the Manchester Pride Parade. The Ticketmaster float will be a festival site complete with a teepee, a stage and grassy knoll. Over 50 Ticketmaster staff from the London and Manchester offices will join the festivities on board the float as it makes its journey through Manchester.

Over 300 employees are based at the Ticketmaster Manchester office, making the city essential to the success of Ticketmaster’s business. With this in mind, the team will also have a recruitment presence at Manchester Pride, exhibiting in the Employers Expo area to reach potential new candidates.

Mark Yovich, President of Ticketmaster International, said, “With a global staff base as diverse as our fans, I am personally grateful to the contributions of our LGBTQI community, in every part of our business. Our partnership with Manchester PRIDE represents a commitment from our company to contribute to positive, actionable change for the LGBTQI community, and support for a greater conversation around diversity and inclusion in business.”

Mark Fletcher, Chief Executive of Manchester Pride, said, “We welcome Ticketmaster’s involvement in The Big Weekend. It has been a great ticket agent and the company’s commitment to LGBT people and equality shines through as a brilliant example to other businesses. The float sounds like a fantastic addition to our Manchester Pride Parade too.”

Earlier this year Ticketmaster was honoured to be a part of the Manchester Pride Spring Benefit, donating raffle prizes for the charity auction. The night raised much needed funds for Manchester Pride and the charities they support.

Thousands of British Pathé news reels are released on YouTube

Giant ants take over the Lowry

Times announced for Olympic and Paralympic Parade in Manchester