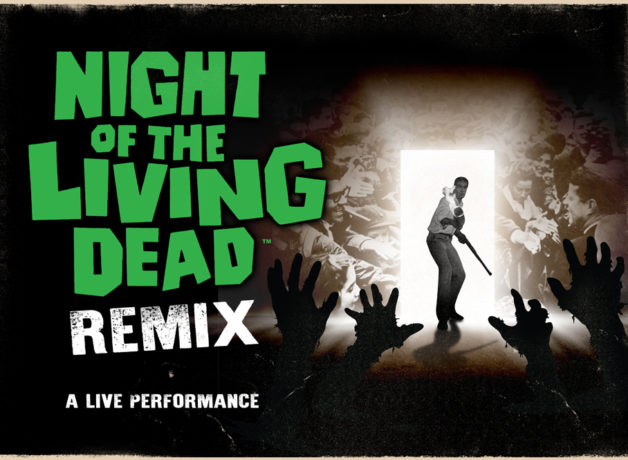 In 1968, Night of the Living Dead began life as a low-budget independent zombie horror movie telling the story of seven strangers taking refuge from flesh- eating ghouls in an isolated and deserted farmhouse.

Directed by George A Romero, it became a cult classic. Today, 52 years on, seven performers have recreated the film in a unique shot-for-shot co- production between imitating the dog, one of the UK’s most original and innovative theatre companies, and the Leeds Playhouse.

Armed with cameras, a box of props, and a rail of costumes, can the cast recreate the ground-breaking film, shot-for-shot, before our eyes, using whatever they can lay their hands on? With 1,076 edits in 95 minutes, it’s a heroic struggle. Success will require wit, skill, and ingenuity, and is by no means guaranteed.

George A Romero’s original was an apocalyptic vision of paranoia, the breakdown of community and the end of the American Dream. In this new stage production, masters of digital theatre imitating the dog create a love-song to the original 1968 film, a remaking and remixing, which attempts to understand the past in order not to have to repeat it.

imitating the dog’s version is in turns humorous, terrifying, thrilling, thought- provoking, and joyous. Above all, in the retelling, it becomes a searing parable for our own complex times.

“Looking at the state of the world today it seems so appropriate that we are going back to this seminal story, the original zombie movie,” says Andrew Quick, co-director and Artistic Director of imitating the dog. “It’s amazing how scary and relevant Romero’s 60s vision still seems.”

Russ Streiner, who produced and appeared as Johnny in the original film, said: “Before Night Of The Living DeadTM became the classic film it is, it started as a collection of ideas and story points; story points that are timeless in their reflection of the human condition.

“We are absolutely thrilled that imitating the dog and Leeds Playhouse have teamed up to present their own authorised fresh and exciting retelling of the story that began over 50 years ago for us.”