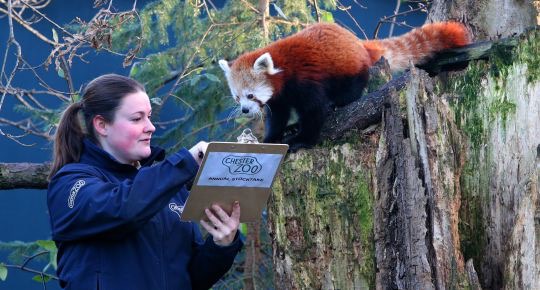 Keepers at Chester Zoo are welcoming in the New Year armed with clipboards and pens as they make a note of every single animal in their care.

The compulsory count is required as part of the zoo’s licence and every creature, from the most handsome lion to the most bizarre-looking beetle, is duly totted up.

Over 11,000 animals were recorded at the last census. But, as the zoo prepares to unveil a £30m expansion in 2015, staff have their work cut out this time around with a whole host of exotic new arrivals to add to the records.

The new development, called Islands, is the biggest in UK zoo history and will recreate habitats from the Phillipines, Bali, Sulawesi, Papua, Sumba and Sumatra.

Thousands of animals, including bizarre species like dead leaf mantids, Javan humphead lizards and tentacled snakes, have already arrived at the zoo ahead of its opening next spring.

Records at the zoo are regularly updated to allow for any births, deaths, departures and arrivals – with every animal having a ‘passport’ detailing exactly who it is, where it was born and who its ancestors are – ensuring the best possible management of vital worldwide conservation-breeding programmes.

But it’s all hands on deck as keepers help double check the data with a full head-count – a process which zoos must go through by law in order to comply with the Zoo Licensing Act 1981.

With so many new animals coming in to take up residence in our new Islands development, we’ve got an even bigger challenge than usual. Dozens of new species have arrived well in advance of its opening in spring 2015 and they’re already breeding well. It means there are a heck of a lot of new heads to count – with the hundreds of weird and wonderful bugs being the trickiest!

It’s an incredibly exciting time for the zoo though and, even though there’s a lot of extra work, it’s really nice to be able to add all of the wonderful new arrivals to the count.

Historical remains of medieval Ratcliffe to be investigated