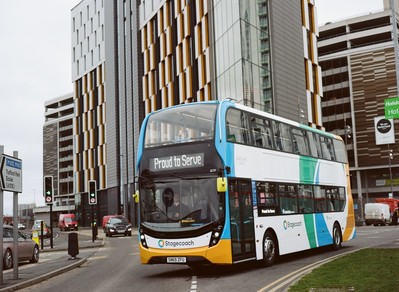 The proposals by Stagecoach are an alternative to proposals being looked at by Greater Manchester’s Mayor Andy Burnham.A decision was expected by March of this year

A total of £142m would be invested by Stagecoach in a package of improvements to deliver a step-change in the region’s bus network, providing improved connectivity, cleaner air, better value for taxpayers and a stronger economy.

Under the new plans proposed by Stagecoach, bus company profits above an agreed benchmark would be shared equally between Greater Manchester Combined Authority (GMCA), the bus operator and a new Partnership Investment Fund.

The new Partnership Investment Fund would see a third of money ring-fenced for Transport for Greater Manchester to spend on improvements across the whole of the region, and the remaining two-thirds allocated to initiatives specifically in South Manchester, such as new routes or bus priority schemes.

Local taxpayers would benefit from up to £25m in savings by Stagecoach and potentially other bus operators no longer being paid to run uneconomic socially-necessary bus routes and instead operating them commercially without any subsidy.

A simpler and more integrated public transport network would be delivered through a unified brand for all bus services in the region. Accessibility would also be enhanced with “talking bus” next stop audio-visual systems fitted to all vehicles.

A new joint Board, chaired by the Mayor and including executives from the Combined Authority and bus operators, would ensure greater public influence over the bus network and accountability of bus companies for their performance. It will also provide greater transparency over decisions affecting bus services.

More than £130m would be invested in around 500 new cleaner low emission buses to boost air quality in Greater Manchester. It would add to the £16.5m fleet of more than 30 electric buses which are already being introduced by Stagecoach on two key high frequency services connecting Manchester city centre, Manchester Airport, five hospitals and two universities from March 2020.

The new proposals have been developed following extensive consultation with senior officials at Transport for Greater Manchester (TfGM). Stagecoach, the main operator in South Manchester, is already committed to the pledges in the new partnership proposals if they are accepted. Other operators in the area would also be invited to enter into the partnership.

Austerity results in ‘social murder’ according to new research