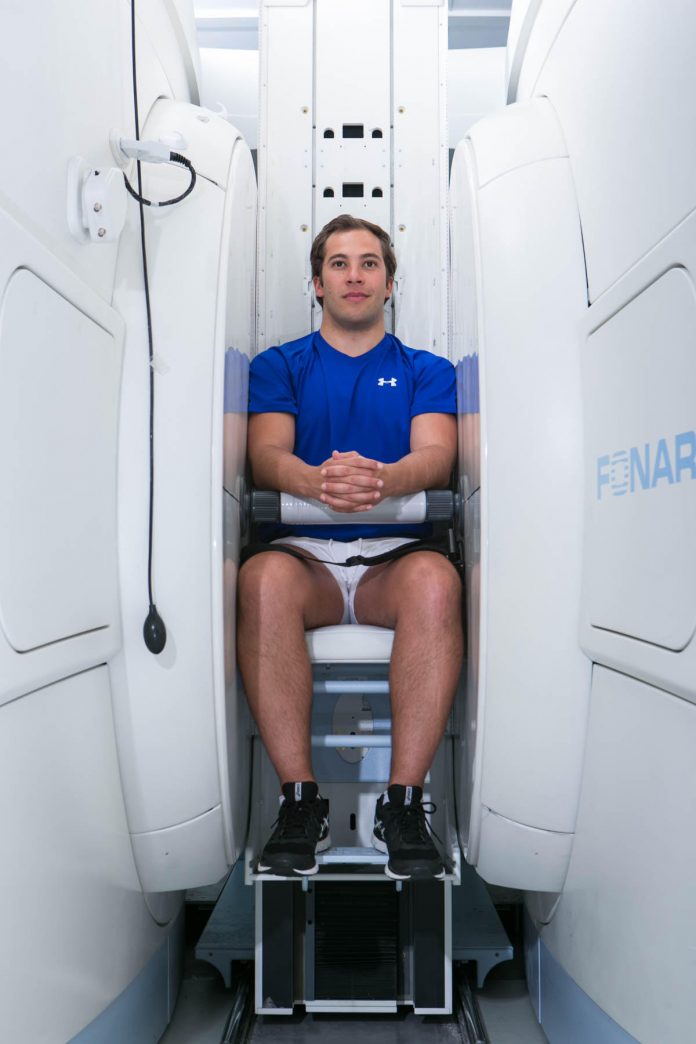 The Medserena clinic, which opens at in West Didsbury at the start of November, houses one of only three truly open Upright MRI scanners in the UK and will be the only one outside Central London.

Unlike the usual supine (lying-down) MRI scanners that are more commonly used, the weight-bearing scans can detect problems that can only be picked up when the patient is in an upright position, offering much more detailed results – particularly with musculoskeletal issues and conditions affecting the spine, as the discs will be in a more natural positon and experiencing the effects of gravity.

For example, the intervertebral discs are exposed to a pressure 11 times higher when sitting than when lying down.

The Upright MRI, therefore, will pick up injuries or conditions that are simply not visible, or are underestimated, when the patient is lying down. The Upright Positional MRI System is also the only scan that allows examination of the spine in various positions. This means the patient can demonstrate the position in which they feel the most pain or discomfort, and the MRI scanner will show exactly what and where the problem is.

It has an important role in evaluation of sports injuries, as it can scan the patient in any position providing the option of scanning the patient in the position that generates their pain. Often abnormalities may be seen to a greater or lesser extent depending on position.

The scanner is also used in the examination and diagnosis of whiplash and holds data that proves the diagnostic accuracy of Upright MRI following whiplash injury is improved by imaging the cranio-cervical junction (where the skull joins the spine).

Using the Upright Positional MRI System, this can be examined in neutral, flexion, extension and rotation if required, offering far more detail on whether whiplash has occurred and the extent of it.

The clinic is also the only MRI centre in the UK to specialise in scanning patients suffering with Ehlers-Danlos Syndrome (EDS), a chronic connective tissue disorder that is characterised by joint hypermobility (joints that stretch further than normal) and tissue fragility.

Medserena’s open Upright MRI System also has the advantage of being a preferable option for people who suffer from claustrophobia – the scanner is completely open with nothing covering the patient’s face. This means that patients who may otherwise be excluded from having MRI have a viable solution. It can also accommodate very large patients more easily than conventional scanners-patients up to 35 stone may be scanned.

Sarah Tarmaster, 35-year old PR Consultant from Didsbury, travelled down to London to make use of the technology to check the condition of her spine after many years of pain. She says:

“I’ve suffered with lower back pain on and off since around 2006 and was put on a number of different drug therapies over the years to cope but with no real cause established. Although I’ve had isolated scans of my left hip and an X-ray of my lower back I was keen to have my spine checked to check if anything more sinister was going on that was causing the discomfort in my lower body – as the previous scans have been inconclusive. I live each day with continual dull ache across my left thigh and knee, with servere discomfort in the foot and pinching in my lower back. On bad days it can feel like my leg and foot are really bruised and burning, limiting my movement and causing me a lot of pain; the muscles can even spasm. I generally manage it now with paracetamol and ibuprofen and ensure I am regularly walking around and stretching, as well as core work and swimming – however there are still days when I’m in a lot of agony and have to work from home.”

“Although I know there is nothing sinister going on in my hip and lower back, I was keen to be scanned in the Upright MRI scanner as I wanted my spine checked in the positions I feel the most pain, which isn’t lying down. Here, my spine was looked at in neutral, flexion and extension positions to ensure that the cause of pain was not because of a nerve being impinged or something more serious. I have had MRI scans in the past and absolute hate the experience of being trapped in an enclosed tube where the noise is extremely loud and you have nothing to distract you.

“I was really impressed at the experience at Medserena – I was able to see the scanner beforehand and the radiographer talked me through what would happen and the different positons I would be scanned in. I was able to sit in an open scanner without feeling trapped and could watch television – I almost fell asleep I was so relaxed! It’s an excellent solution for people with spinal conditions to get really detailed pathology of the spine’s health and it’s perfect for people who feel claustrophobic in traditional scanners. It’s great that it’s now available in Manchester and people further north no longer have to travel down to London to access it.”

“We’re very excited to be opening a second clinic in the city of Manchester, a city known for its sporting prowess. Lying-down scanning is excellent for many conditions, whereas MRI scanning for muscular and skeletal problems, especially involving the spine, gives much more accurate information under the effect of gravity. It’s also possible to make images with the spine flexed and extended, which can show detail that may not be visible when scanned in a neutral, supine position. We’ve seen many cases of people who have come with previous scans that haven’t detected abnormalities which can put patients at serious risk of extended injury problems. As in every case, obtaining the correct diagnosis quickly and in the correct position is of paramount importance.”