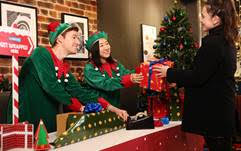 Greggs are coming to the rescue of stressed out shoppers with a free in-shop gift wrap service all in bespoke Festive Bake wrapping paper!

The exclusive gift wrapping service launches in five Greggs shops nationwide from 11th – 13th December including Parker Street in Manchester where, between 4pm and 8pm,Greggs’ elves will be on hand to wrap presents for free in bespoke Greggs wrapping paper with a Festive Bake design, while customers can put their feet up with a complimentary glass of mulled wine.

A limited edition range of Greggs stocking fillers will also be available in these shops including the first ever Greggs Christmas jumper, doughnut socks, sausage roll inspired umbrella, phone case, reusable cup, Christmas cards, a high roller gift card and a set of pin badges in the image of the nation’s favourite Greggs menu items.

The festive service is being launched in light of new research that reveals over two thirds of the nation (69%) admit they find the build up to Christmas stressful, with shopping for presents, wrapping gifts and washing up after Christmas dinner named as the chores dreaded the most.

Half of Manchester respondents (48%) said that wrapping gifts is one of the festive jobs they’d most like to pay someone else to do, admitting they would happily stump up £9.89 on average to avoid it – perhaps not surprising as they expect to spend an average of 1 hour 53 minutes wrapping all their gifts.

All proceeds from Greggs’ gifts will be donated to the Greggs Foundation – a grant-making charity that improves the quality of life in local communities nationwide, aiming to make a difference to people in need.

Half Term Means Half Price for Kids at Knowsley Safari