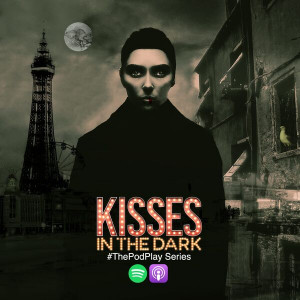 MancMade Productions releases “Kisses in the Dark”.  A sinister, disturbingly romantic seven-part podcast drama series set against the bright lights of Blackpool, as a supernatural killer is at work and a dark and dangerous love affair begins.

“I put a call out on social media for scripts for “The Pod Play”, a series we produce that records world premiere plays and releases them as podcasts. Marty (Ross) got in touch and told me about the idea behind “Kisses in the Dark”, a project he’d been looking to get off the ground for a while.

I loved the idea of helping to bring Marty’s truly original creation to life and the fact that it was gritty, so different to anything else out there plus it would be something that listeners would have to invest some time in, allowing us the time needed (and not always given) to
tell the story of the two main characters, Tusk and Kate, over a few episodes…seven, as it turned out.

In terms of casting… I knew after reading the script for the first time that Rhiannon would be perfect for the part of Kate. She came on board as soon as she had read the script for episode one.

I’ve always been a massive admirer of Con’s work, in fact when Marty sent me the script I’d just finished watched “Chernobyl” which I thought, like many others, was one of the best TV series I’d ever seen, and he was brilliant in it. I got in touch with Con, sent him the script and like Rhiannon he agreed to come aboard after reading Ep1.

I’m not going to lie, getting someone like Con involved was a massive coup for us and definitely gave the production some real kudos. He has been brilliant all the way through, as have all the cast.”

Listen and Subscribe to “Kisses in the Dark” and “The Pod Play” on your podcast app of choice or click here for more information.

Is this the best weekend job? Pub to hire a ‘Pro-tato Tester’ to...

Beeb promises a feast of entertainment during the Covid-19 crisis