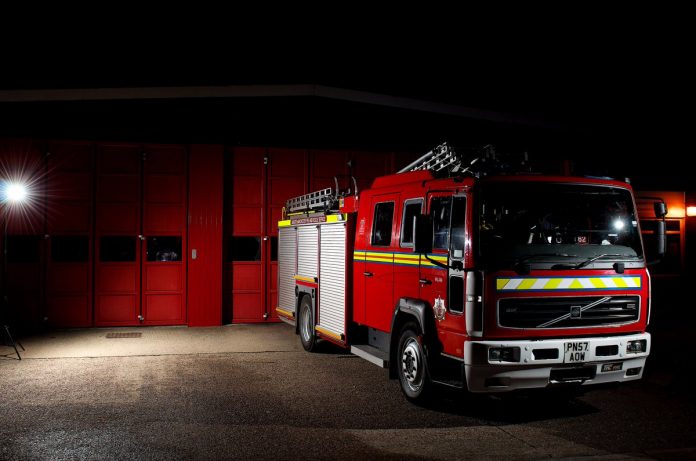 A mother and daughter had to jump out of a first-floor window to escape a fire caused by arsonists in New Moston in the early hours of this morning.

Police were called to two fires on Nevin Road and Melford Avenue – just yards away from each other.

In the incident on Nevin Road a bin was taken from a driveway and moved to a covered walkway at the back of the house before being setting alight.

The fire spread to the outside of the home but thankfully the family smelt smoke and got out safely.

In the second incident on Meflord Avenue a bin was taken from the street and put in front of a door to a block of flats.

Again it was set on fire and the flames spread up the stairs.

A mother and her teenage daughter were woken up by their smoke alarm going off. They then tried to get out of their front door but were confronted by the flames.

In a bid to escape they had to then jump out of their first- floor flat window.

They were both taken to hospital for injuries suffered as a result of jumping out of the window as well as smoke inhalation. They remain in a stable condition in hospital.

Detective Chief Inspector Paul Walker, from GMP’s City of Manchester Team, said: “This would have been utterly terrifying for both families involved and I’m extremely thankful they all managed to get out.

“I can’t imagine the horror of being woken up in the middle of the night to smoke pouring in to your home to then try and escape be faced with a wall of fire. They truly believed if they didn’t jump out of the window they would die.

“A mother and daughter have now lost a home and all of their belongings. Whoever did this needs to be caught and we are doing everything in our power to find the person or people responsible for this reckless act.

“If you know anything about these fires then please do the right thing and call us. Even if you think it might be a tiny detail, it could be vital to this investigation.

“Extra officers will be carrying out patrols in the area and please feel free to approach them if you have any concerns.”

Chairman of the Greater Manchester Combined Authority Fire Committee, Councillor David Acton, said: “Having a working smoke alarm gives you an early warning to a fire at your home – like in this incident where the alarm went off and alerted the family to the fire.

“We encourage everyone to ensure their home has a working smoke alarm on all levels, and test them regularly to make sure they work.”

Anyone with any information is urged to call police on 101 quoting incident number 187 of 8 August 2017. Details can also be passed on anonymously by contacting the independent charity Crimestoppers on 0800 555 111.