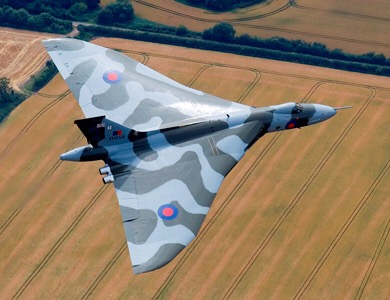 It has been confirmed that one of the world’s most popular aircraft, Vulcan XH558, will make its final ever appearance in the North West at this weekend’s Blackpool Air Show.
The final remaining Vulcan is in her final flying season before being retired after a remarkable career which saw the plane play a key role both during the conflict in the Falklands and during the Cold War.
Vulcans were designed and built at Woodford Aerodrome, in Chester Road, Stockport, for the Royal Air Force by Avro,making its maiden flight in 1952.

And to celebrate the crew, led by Martin Withers who captained Vulcan XM607 on the famous Black Buck mission during the Falklands conflict, have launched a dramatic new display routine.
Returned to the skies in 2007 following what is now believed to be the most ambitious technical restoration programme ever undertaken, Vulcan XH558 is operated by the Vulcan to the Sky Trust (VTST).
The charity has been raising more than £2 million each year to service and operate the aircraft, which is based at Robin Hood Airport.
VTST Chief Executive, Dr Robert Pleming, said: “If you don’t see her this season, there will be no more opportunities to hear a Vulcan’s spine-tingling howl as she climbs high into the sky for another dramatic display, or to see her rolling onto her side to reveal her giant delta silhouette.
“It is highly gratifying that the aircraft is making a return appearance to the Blackpool Air Show, where she has attracted huge crowds and been given an incredible welcome in her previous visits to this world famous resort with its incredible promenade and golden sands.
“She will be amongst many iconic aircraft and in highly distinguished company; however, it is very sad that this will be the last time she performs her spectacular display with the stunning backdrop of Blackpool Tower and over the Irish Sea.”
VTST are also running a free prize draw throughout the flying season in which entrants can win a once in a lifetime opportunity to be on the tarmac and attend the aircrew briefing on a day when the Vulcan takes off from Robin Hood Airport.
The prize will also include dinner with the aircrew on the night before the flight with hotel accommodation provided.

Air enthusiasts say the final chance to see the Vulcan in the North West is the highlight of this weekend’s show on Sunday 9 and Monday 10 August.

Performing alongside the Vulcan is the world famous RAF Red Arrows, who recently opened their exciting new ride at Blackpool Pleasure Beach, the incredible Battle of Britain Memorial Flight, a group of daredevil wing walkers and the Red Devils, the army’s parachute regiment display team.

Organisers are promising the Best of British aviation and are hoping for fair weather to allow the flying machines to showcase their skills to their maximum ability.

The contest this year is hosted in association with media partner Rock FM who will provide entertainment on the day for the thousands in attendance.

As well as big names like the RAF Red Arrows showcasing their incredible formation precision flying on the Sunday, there are also displays from two local military giants – the BAE Warton built-Eurofighter Typhoon and a fully restored, Blackpool-based “Huey” helicopter.
The Huey is an iconic, celebrated American helicopter which played a vital role in the conflicts in Vietnam and Korea.
There is also a Blackpool first with the historic Boeing B-17 Flying Fortress coming to the resort for the first time ever.