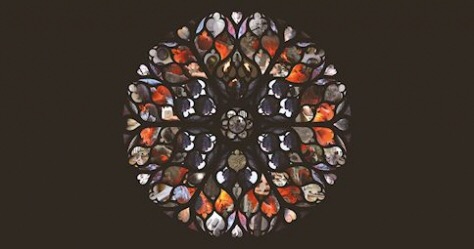 A immersive artwork by Manchester School of Art lecturer is currently on display at the prestigious Yorkshire Sculpture Park.

Song for Coal by Ian Rawlinson is an audio-visual collaboration with Nick Crowe in the park’s newly restored 18th century St Bartholomew’s Chapel.

The work explores the physical and cultural properties of coal, considering it as a cypher for the environmental and conceptual impacts of our carbon based economies.

Song for Coal takes a form based on the flamboyant tracery of the apocalyptic rose window of Sainte Chapelle, Paris. Broken down into one hundred and fifty two separate panels, each section of the rose hosts its own individual film, creating imagery that is visually rich, slowly evolving and meditative, with kaleidoscopic patterns of coal as a mineral, economic driver and a source of iconography.

Working with Opera North singers and Music Director Justin Doyle, Crowe and Rawlinson have created a plainsong, based on The Coal Catechism by William Jasper Nicolls.

This 1898 publication was one of many secular catechisms produced that century, which provided educational insights into the industrial age by means of question and answer dialogues.

Looking at human-induced climate change and exploring apocalyptic fears, Song for Coal considers the Industrial Revolution as an ongoing process. The project, coinciding with the end of the 30-year anniversary of the UK miners’ strike and an ongoing collaboration with the National Coal Mining Museum , offers a poetic and historical response to an industry, which still figures large in the cultural memory of the region.

The artists have worked with the collection of the National Coal Mining Museum and Drax Power Station, both within a few miles of YSP, in filming sections of the work.
They have also employed the rare practice of cannel coal carving to create objects and figurines which were later burned in front of the camera.

Crowe and Rawlinson work collaboratively between studios in Berlin and Manchester. Their work is primarily concerned with the languages of power, with its grammar and rhetoric. Their projects address questions around faith, politics, national identity and the environment.

Recent projects include exhibitions at Northern Gallery of Contemporary Art, Sunderland and VulpesVulpes, London, and a commission for The Whitworth Art Gallery, Manchester. They were short-listed for the Northern Art Prize in 2009 and Song for Coal will form part of a solo exhibition of their work at MEWO Kunsthalle, Memmingen, Germany in 2015.