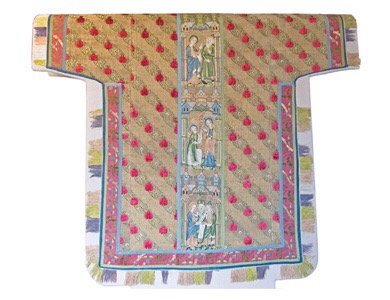 A set of exquisite medieval vestments, which are part of the collection at Towneley Hall, has been loaned to the world-renowned Victoria and Albert (V&A) Museum to form part of a major national exhibition.
The pair of Whalley Abbey vestments will feature at the museum’s autumn exhibition Opus Anglicanum: Masterpieces of English Medieval Embroidery.

From 1st October, the Towneley’s prized possessions will be one of over 100 beautiful embroideries on display, showcasing the dazzling skill of English needle-workers who stitched gold, silver and pearls into pieces worn by kings and pope.

Councillor Bea Foster, Burnley Council’s executive member for leisure and culture, said: “We were very pleased to support this major national exhibition by loaning important artefacts that we hold in Burnley. This shows that our borough has got some really significant and impressive items in its museum collections.”

Made of luxurious Italian velvets and brocaded with gold thread and coloured silk, the 15th-century Whalley Abbey vestments are a shining example of the fine craftsmanship that existed in medieval England.

The vestments have beautifully embroidered decorations attached to them showing scenes from the life of the Virgin Mary and the infancy of Christ.

The full set, which included a chasuble, two dalmatics and a maniple, was first recorded in the inventory of the Cistercian abbey in Whalley, Lancashire. Unfortunately, it is not known how they reached the abbey.

After the dissolution of monasteries, the vestments were rescued by Sir John Towneley, a member the Towneley family, a local Roman Catholic family, who kept and occasionally used the vestments over the following four centuries.The chasuble, dalmatic and maniple from the set were sold at Sotheby’s by a descendent of the Towneley family in 1922, and were purchased by Burnley Corporation.

The second matching dalmatic was not included in the sale and was later sold in 1939 where it was purchased by John Hunt who sold it shortly after to Sir William Burrell. Today it can be seen at the Burrell Collection in Glasgow.These vestments are one of the precious survivors of an art form in which England once led the world.

The Latin phrase Opus Anglicanum used in the exhibition title means “English work”, and it demonstrates how across Europe, people associated the dazzling skill and luxurious materials with English needle-workers.

The Whalley Abbey vestments are set to be back to on the permanent display at Towneley Hall in February next year.

A V&A Museum spokesperson said: “We are so grateful to Towneley Hall for their agreement to lend the beautiful chasuble and dalmatic from the collection.”