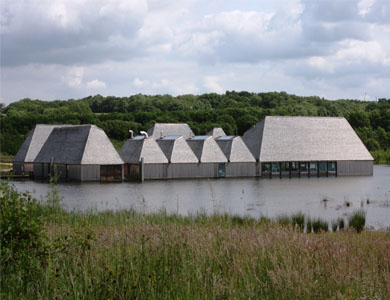 Brockholes, Lancashire’s youngest nature reserve will feature on Countryfile on Easter Sunday.
And viewers nationwide will get a treat as the reserve puts on a brilliant show for the cameras.
It will be the first time Brockholes has featured on the nation’s favourite countryside show since it opened at Easter 2011.

Events and Communications Manager Sarah Leach said: “When our staff or volunteers arrive at Brockholes in the morning we often see brown hares running around the site. We have even seen them boxing from the office window in spring.

“Countryfile got to hear about this and asked if they could come down to film this. Of course we were delighted to host them.”

During a recce of the site the Countryfile team spotted one hare but not the numbers promised by The Lancashire Wildlife Trust, which owns the nature reserve.

LWT Head of Marketing Lindsey Poole said: “I think they fell in love with the reserve and said they would come along to film wildlife at Brockholes. If we saw the brown hares it would be a huge bonus.

“We met them at 6am on the morning and spent a day getting some wonderful wildlife on film. They have displaying kestrels and lapwings, flying swans, 20 snipe feeding on an island and a camera-friendly little ringed plover.”

And what about the hares? Sarah said: “It was a bit like a TV drama with unexpected twists and turns – like the workmen delivering hardcore just as Countryfile were about to start filming. Oh no!

“It was quite tense and we were just hoping and hoping that some brown hares would appear to put the icing on the cake of a really great day for Brockholes.”

The Wildlife Trust is also waiting to see who will appear – the team filmed Head of Conservation Tim Mitcham, Campaigns Officer Alan Wright and the volunteers involved in “hare spotting”.

Lindsey said: “People who know the reserve will be delighted to see the wonderful wildlife we have here. People who haven’t been will want to come.

“As for brown hares on Countryfile? You will have to wait to see the show on Easter Sunday?”
Countryfile is aired at 7pm on Sunday. Brockholes is open all year round – with lots of events and activities for everyone. Details at www.brockholes.org or call 01772 872000.

Blackpool to join the Northern Powerhouse