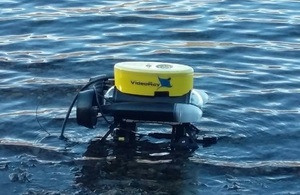 Vendace (coregonus albula) is the UK’s rarest freshwater fish and a relic of the ice age. Its UK habitat is in Derwentwater and like lamprey, Arctic charr, spined loach, allis shad, twaite shad and smelt, it is an international conservation priority.

Andy Gowans, Environment Agency fisheries specialist, said:
It was a unique moment to capture this iconic fish live on film. Seeing the vendace is a good indication of the health of the lake’s water. Derwentwater is the only place these fish inhabit in the UK, so maintaining the quality of the water is vital for their survival.
Dr Ian Winfield, from the Centre for Ecology & Hydrology, who leads the survey on Derwentwater and operated the remote-controlled yellow submarine, said:
As the day closed, I decided I would go out to the deepest part of the lake which is about 20 metres and drop the submarine in. I’m able to view the images from the submarine’s filming live and was keen to see what fish showed up.Although, the vendace came and went within in a matter of seconds, I knew it was a vendace. This was an amazing moment for a scientist, I was not expecting to see one, never mind film one. I knew I had captured for the first time on film the elusive vendace species.