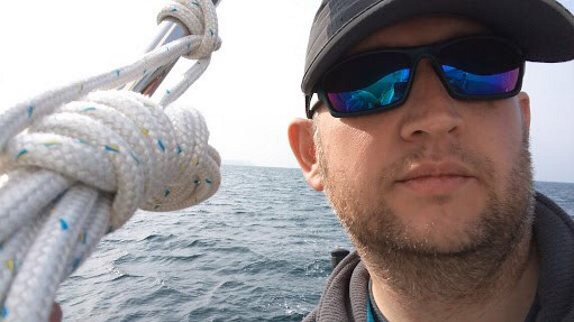 A former soldier turned University of Chester student has spent his summer on the journey of a lifetime, sailing 2,000 miles around the British Isles to help army veterans who have been left affected by their service in the military.

Before enrolling as a Media student at the University’s Warrington Campus, Russell Pollard, 38 and from Warrington, had a 12 year career with the Royal Corps of Signals which saw him complete a tours of the Middle East, West Africa and the Balkans.

Although Russ decided to leave the Forces and pursue a career as a Project Engineer for high-end hotel chains, he still carried with him some mental health issues, sustained as a result of his army career.

Russ became involved with the Help for Heroes, Band of Brothers network – a fellowship which offers support to veterans and serving personnel who have suffered a permanently career limiting or career ending injury or illness directly attributable to service. Through the network, he heard about an opportunity to become involved in the ‘Turn to Starboard Round Britain Challenge 2016’.

The challenge saw a chosen few veterans embarking on the journey of a lifetime and harnessing the power of wind to sail round the coast of Britain. Russ was one of 38 crew members to be selected to challenge their minds and bodies and participate in the Challenge. Owing to the overwhelming amount of applications, two yachts, in addition to the ‘Spirit of Falmouth’, a 92-foot gaff-rigged schooner, took part.

With a core crew of six, which included highly experienced yacht masters, each boat was joined by the veterans for shorter sections of the journey, all of whom have been affected by military operations at some point in their lives. Russ, who is about to embark on the final year of his BA (Hons) Media degree, offered to film the whole event using the skills that he had learned as part of his course.

He also made a one-hour long radio show which he recorded and edited while on the boat, and which was broadcast in June, on Chester-based community radio station, Flipside Radio. Russ spent his five-week experiential learning placement there, prior to embarking on the trip.

As such, Russ was able to take part in the full challenge, which meant leaving behind his partner, Michelle, and three children, Jordan, 17; Luke, 16 and Freya, six, for the two month trip.

Before leaving home, Freya gave her daddy a teddy called ‘Frazer Bear’ to accompany him on the adventure. Owing to a good 4G signal for most of the way around Britain, Russ and Frazer Bear were able to keep in touch with Freya via mobile phone, sending postcards and photographs to keep her updated on their travels.

Russ said: “It was really hard to be away from my family, but it was an amazing opportunity and I think it’s really important to instil a sense of adventure in children. Freya was very excited to see us arrive at CBeebies’ Ballamory – which is actually filmed in a place called Tobermory, in Scotland.

“The trip itself was physically tough and it was difficult to overcome tiredness and physical fatigue when the rain stung your face like wasps on the breeze. I got quite emotional at times. There were also some technical difficulties with ‘Spirit’ which caused a few hiccups, but it all went fairly smoothly really.”

He added that the experience had been a life-changer: “It’s difficult to explain the positive impact it’s had on me. Everyone around me has noticed. I feel like a new man, happy in my skin for the first time in years with much more drive and energy. I feel like Russ 2.0!”

Russ has definitely caught the sailing bug and has already signed up to complete a ‘Day Skipper’ assessment in November. For now, he is now looking forward to returning to his academic studies and after graduation hopes to follow his dream and work in the factual entertainment industry, making documentaries which highlight important issues. He also hopes to undertake further study on a Master’s programme and PhD.

Tickets for the flying Scotsman go on sale

Early bird tickets for Lytham 2017 go on sale this week