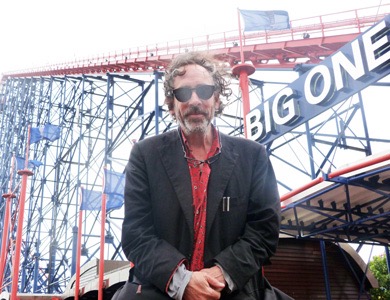 The legendary film director Tim Burton is to switch on this year’s Blackpool illuminations.
Burton has been a regular visitor in Blackpool in recent years choosing to shoot scenes for US band The Killers music video “Here with Me” and his latest film, “Miss Peregrine’s Home for Peculiar Children,” in the resort.
The switch-on will take place on Friday 4 September on the Tower Festival Headland following a star-studded concert with performances from a host of stars including The Vamps, Lawson and Professor Green.
Tim, who has previously referred to himself as Blackpool Pleasure Beach’s biggest fan, will turn on this year’s Illuminations in front of a crowd of 20,000 people.
Earlier this year, the director shot scenes for his upcoming film Miss Peregrine’s Home For Peculiar Children in Blackpool.
Hollywood A-lister, Samuel L Jackson, was one of cast that filmed in scenes on the Promenade and inside The Blackpool Tower.
The film, set to be released early next year, will feature Blackpool to a world-wide audience.
The Friday night Switch-On concert marks the start of a three-day festival of entertainment on the Tower Festival Headland entitled Blackpool iFest.
CBBC will take over the arena on the Saturday morning to broadcast their Saturday Shout Out show live.
Then on Saturday evening, Pat Sharp will host a night of vintage music headlined by Bananarama followed by a comedy extravaganza on Sunday night hosted by Al Murray – The Pub Landlord.
Cllr Gillian Campbell, Deputy Leader of Blackpool Council, said: “Having one of the most famous film directors in the world turn on the Blackpool Illuminations is a major coup and shows the high regard the town is held in the hearts of our famous visitors.
“Millions of people around the world have enjoyed the films Tim has directed including Edward Scissorhands, Batman and Planet of the Apes.
“We know he is a huge fan of Blackpool and we are delighted that he has agreed to switch the Illuminations on for us on the biggest night of Blackpool’s year.