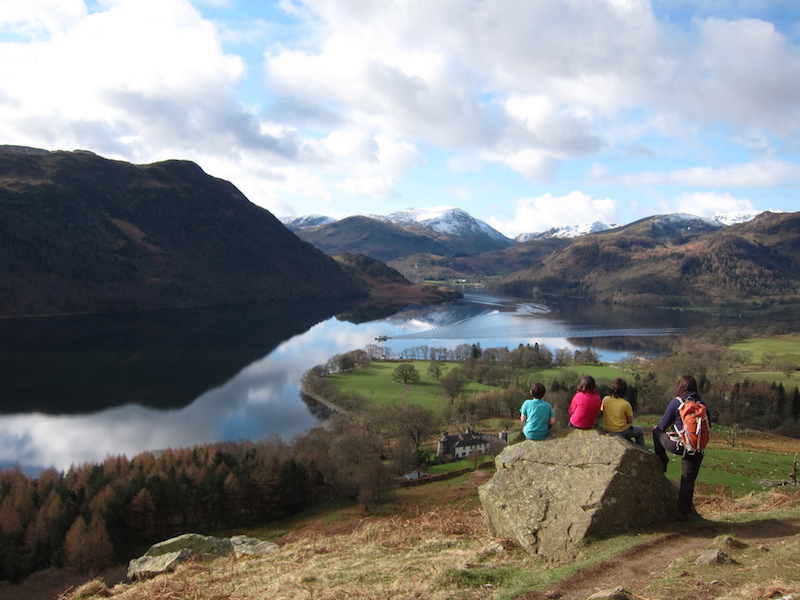 Communities and businesses around the Lake District’s Ullswater Valley are celebrating the launch of a brand new walking route – the Ullswater Way – around what many believe to be England’s most beautiful lake.
The new, 20-mile walking route connects the spectacular scenery along the shores of Ullswater and surrounding mountains, with the picturesque villages and attractions of this special corner of the Lake District.

Access to the central Lake District will also be improved this week with the re-opening of the A591, which has been closed since December following damage caused by Storm Desmond. Previously voted ‘Britain’s Best Drive’, the road is an important route between Grasmere and Keswick.
Suzy Hankin, Area Ranger for the Lake District National Park, said: “The Ullswater Way is a fantastic example of people working in partnership on a project that will hopefully give the local economy a much needed boost. Ullswater remains a popular corner of the Lake District, yet people tend to explore it in pockets rather than connecting their journey. The community around Ullswater wanted to encourage visitors to enjoy the valley’s iconic scenery on foot, but to also utilise links to the public transport network, and hopefully give people a reason to stay for longer.

Although there were already existing walking routes in the area, there wasn’t a fully connected route around the lake. So we have been working with local people, businesses and landowners to improve access, including a new 2.5km public right of way, and the installation of new waymarkers, fingerposts and gates to make it easier for people to navigate on the ground.”

The Ullswater Way crosses sections of open fell and farm land, offering visitors stunning views, as well as the path Wainwright described as ‘the most beautiful and rewarding walk in Lakeland’. The route also includes a new section of footpath near Maiden Castle, once the site of an Iron Age Hill fort it now offers spectacular views of the Ullswater Valley, as well as views to the Pennines to the East and Blencathra to the west.

Jim Walker, from Ullswater Steamers, and Chair of the working group said: “Ullswater is famous for its stunning views of the lake and the surrounding mountains – from kayaking to climbing Helvellyn and from the spectacular waterfalls at Aira Force to simply enjoying the local hospitality. The Ullswater Way now means long distance walkers can now walk round the full 20 mile route, and those who want to explore at a more leisurely pace can break up the journey by including a trip on the historic Ullswater Steamers or open top bus.”