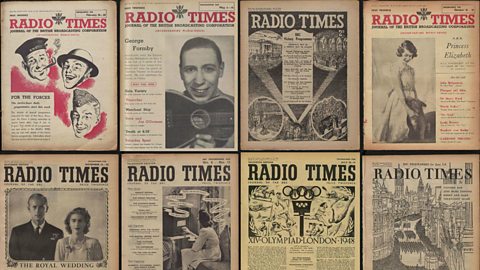 The BBC has today made the 1940s issues of the Radio Times magazine publicly available online for the first time.

The release, by the BBC Genome Project, covers World War Two, the immediate post-war years and key landmark events in British history such as the Royal Wedding in 1947 and the 1948 London Olympics.

The 1940s also saw the beginnings of well-loved and long-standing programmes: Woman’s Hour, Any Questions? and Desert Island Discs.

During the first half of the decade Radio Times magazines became slimmer, as resources were diverted to the war effort. Programme billings were often written allusively, with precise locations concealed to avoid giving away too much information for security reasons.

Television returned in 1946, after its suspension during the war. There were a series of ambitious outside broadcasts, including the Victory Parade in 1946, the wedding of Princess Elizabeth II and Philip Mountbatten in 1947, and the London Olympics in 1948, which was announced by Radio Times as: “the biggest operation of its kind that the BBC has ever undertaken”.

Renowned artists Eric Fraser, Ronald Searle and Victor Reinganum were among those who contributed artwork to Radio Times during this period.

Prof. Jean Seaton, Historian of the BBC, comments: “This release gives a gripping insight into Britain during the Second World War. It shows everyday life, the tension of the blitz and the D-Day landings on Europe. But the excitement of the post war Royal Wedding and the thrill of the London Olympics are also there. The Radio Times takes you directly to what it was like to live through a pivotal decade in the nation’s history.”

Access the 1940s editions of the Radio Times online here.