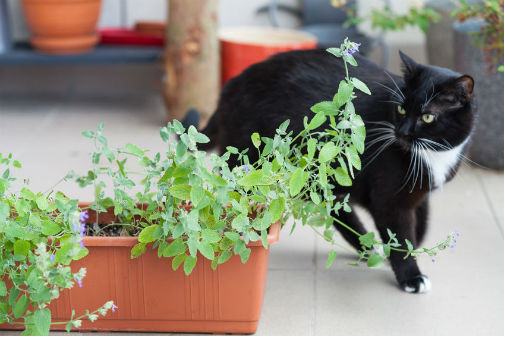 Researchers have shown how catnip produces the chemicals that send cats into a state of frenzy.

Catnip is a plant in the mint family and is known for triggering playful behaviour in cats. The intoxicating effects are the result of a substance called nepetalactone, which is a type of chemical called a terpene.

Typically this chemical is formed in plants from a single enzyme, but scientists have now shown that catnip terpenes are produced in a two-step process, which researchers believe is the same process that occurs in other plant-based chemicals, such as vinblastine, which is used for chemotherapy.

Understanding this process could lead to the ability to create medicines, such as anti-cancer drugs derived from plants, more efficiently and quickly than scientists are currently able to harvest them from nature.

Dr Benjamin Lichman, who conducted the work while a post-doc at John Innes Centre and who is now a lecturer at the University of York’s Department of Biology, said: “We have made significant progress in understanding how catnip makes nepetalactones, the chemicals that sends cats crazy.

“Catnip is performing unusual and unique chemical processes, and we plan to use these to help us create useful compounds that can be used in treatment of diseases such as cancer.

“We are also working to understand the evolution of catnip to understand how it came to produce the cat-active chemicals in the first place.”