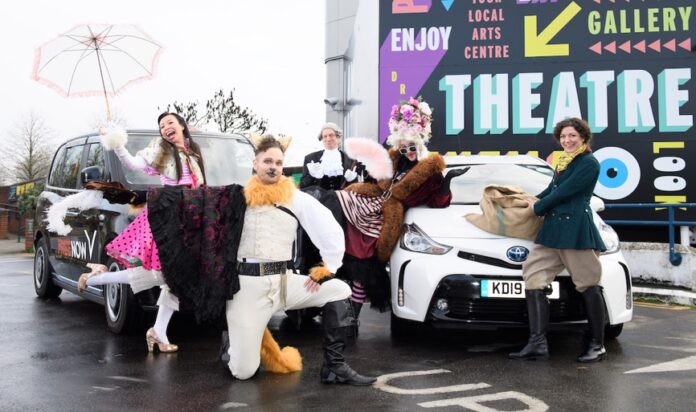 FREE NOW, Europe’s Number 1 ride-hailing app, has today announced it is gearing up to bring the World’s first Hail-a-Panto to the front doors of UK residents this Christmas.

The ‘Puss in Boot’ panto will features everyone’s favourite characters as they pull up one by one in a fleet of black cabs and private hire vehicles, jumping out on cue to perform a shortened version of one of Britain’s most iconic Christmas traditions – the beloved panto.

Research carried out by FREE NOW suggests that two thirds of Brits (66%) believe communities need the performing arts more than ever and over a quarter of those surveyed (28%) said they usually watch a Christmas pantomime at least once a year.

It also revealed that a third (28.75%) of respondents said they would attend a safe and socially distanced pantomime if it was available this year and almost half (47%) said they wished to go to a Christmas Pantomime in the future.

“We can all agree it’s been a tough year and as a business we are passionate about bringing communities together and helping people get about. With so much uncertainty around how holidays will look this year, we thought what better way to spread some Christmas cheer than to bring the entertainment right to people’s doorsteps with a little help from our black cabs and private hire vehicles. For those who have perhaps been stuck indoors and not as mobile, this is the perfect way to put a smile on some faces as the year draws to a close.”

FREE NOW has partnered with Gideon Reeling, best known for their theatrical performances and storytelling, to create the unique ‘Puss in Boot’ panto, that follows the storyline of the Third Son of the Miller, the hero, and named by his trusty cat servant Puss in Boots as ‘The Marquise de Caaaabbbhhaabs’. Other characters include ‘Old Dame King’ – the Queen of the Blackcab country, ‘The Footman’, ‘The Beautiful Princess Terrust’ … and a socially distanced horse.

Half of respondents of the FREE NOW survey (52.6%) said their favourite thing about a pantomime is that it makes people laugh and FREE NOW hopes to bring some festive cheer with their production – with a little horsing around!

“Since lockdown began in March theatres and theatre professionals have found their businesses decimated, with shows and Pantos all over the UK having been cancelled, it’s been very hard for audiences and artists alike. So we were really excited when we got a call asking us to be a part of a Panto that turns up at the audiences’ doors. It’s something we’re delighted to be able to help bring to communities at the end of such a year.”

The show comes as Panto Dames took to the streets of London earlier this Autumn in protest against the cancellation of Pantos in the wake of Covid-19¹.

Consumers can enter to win the chance to watch this Panto performance at their own front door by clicking here.

Wailers to play Manchester in March

Milkin’ it? The perfect beer for Veganuary