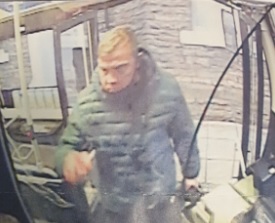 Police investigating the racially aggravated assault of a bus driver in Rochdale have released images of a man they want to speak to.

At around 3.30pm on Thursday 26 November the driver of the number 457 bus stopped at a bus stop on Whitelees Road, Littleborough, pausing at the location for a period in order to maintain the correct timetable.

A man aboard the bus began demanding the driver move on to the next stop. The man then verbally and racially abused the driver before punching him in the face.

The driver, aged in his 40s, thankfully did not receive any serious injuries but was left understandably shaken by the incident.

No arrests have been made and officers have released images of a man they want to speak to in connection with the assault.

Constable Millie Rothwell of GMP’s Rochdale District said: “This is a completely unacceptable assault on a man who was simply minding his own business and doing his job.

“There were people aboard this bus when the incident occurred and we are today releasing pictures of a man who we believe can help with our enquiries.

“If you witnessed the assault, recognise this man, or have any details that can assist our enquiries, please get in touch.”