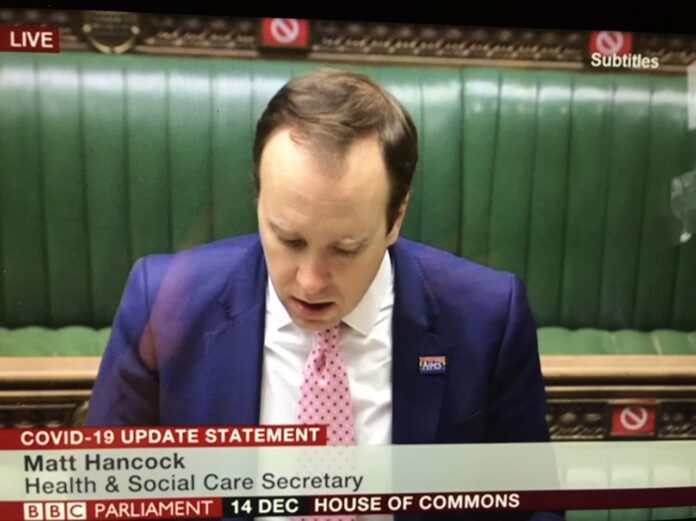 Greater London, parts of Essex and Hertfordshire are to placed into Tier 3 regulations from Wednesday, the Health Secretary has announced in the Commons.

Matt Hancock also announced that a new variant of the virus has been identified which may be the reason for the increases in the South East.

The latest figures show that the average daily pieces have risen by 14 per cent in the last week, and we’re seeing a sharp rise in South Wales in London, and parts of the east and southeast of England.” said the Health Secretary

“We’ve currently identified over 1000 cases with this variant predominantly in the south of England,” he told MPs.

The World Health Organization has been notified, adding that it is unlikely to cause more serious disease than other variants.

Businesses will be pushed towards failure and more jobs put at risk as a result of moving London and parts of Essex and Hertfordshire into tier 3, UKHospitality has warned. The trade body has warned that the Government’s tier system places an unfair, illogical and disproportionate burden on hospitality businesses without effectively tackling COVID.

UKHospitality Chief Executive Kate Nicholls said: “Putting hospitality businesses back into lockdown, which is effectively what tier 3 amounts to, is not going to tackle increasing infection rates.

“There’s still no hard evidence that hospitality venues are a significant contributor for the spike in infections. Cases were higher at the end of the last lockdown – during which hospitality was shut down – than at the start. The spread is being predominantly driven through schools – even the Mayor of London has pointed this out and called for schools to stay shut until January. Yet, once again, it is hospitality that will take the hit. The Government is cracking down on hospitality for an increase in the infection rates that occurred during a period when hospitality was forcibly closed. It makes no sense.

“So many pubs, restaurants, bars, cafes and hotels, having invested so much to make their venues safe, are only just clinging on by the skin of their teeth, but will be forced to take another huge hit. The burden of a region being moved into tier 3 falls almost exclusively on hospitality businesses. It is an illogical tactic that fails to tackle COVID effectively but does push businesses closer towards failure.

“The Government must re-think its strategy to combating the spread of COVID, including moving areas like Manchester, Leeds and Birmingham into Tier 2. Just continuing to batter hospitality is not the answer.”

Enhanced Covid testing in Moston and Harpurhey comes to an end