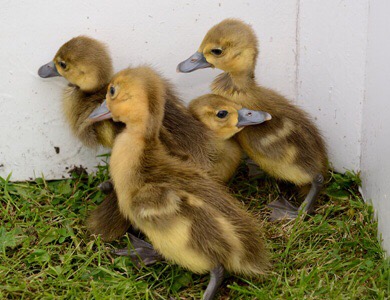 Four Spur-winged goose goslings have hatched at WWT Martin Mere Wetland Centre. The spur-winged goose is one of the rarest birds in captivity.
Martin Mere has a pair of spurwing geese and is the only location in the north of England where you can come along and see them – the only other location is a wildfowl collection in Sussex. Heralding from Africa, this goose is not rare in the wild but Martin Mere is one of the only places in this country to come and see them up close.

The last time Martin Mere reared spur-winged goslings was back in 2007 when 10 goslings hatched out.

Grounds manager, Steve Nasir, says: “The Spur-winged geese are magnificent birds, I am absolutely delighted and very excited about breeding these birds – it will actually be the first time I have ever been involved with rearing spur-winged. Not only do we get comments that they look like dinosaurs but the male has sharp spurs that over an inch long on their wings. They use these spurs in defense and it is the only bird that has a risk assessment in the Martin Mere grounds.”

What makes them even more unusual is that in the wild the spur-winged geese will eat blister beetles which have a poison called Canthardin. This poison builds up as toxins in their body which actually makes the birds poisonous to eat.

The goslings are now 2 weeks old and will soon be available to see in the duckling nursery.

In other news at the centre, there are over 6000 pink-footed geese on the reserve that have travelled to us from Iceland. We will be expecting up to 30,000 to arrive over the next couple of weeks and every Wednesday and Saturday we are offering late night openings until 7pm. After 5.30pm you can come onto the nature trail for free to watch the last hour of the spectacle – just follow the signs when you get to the car park.