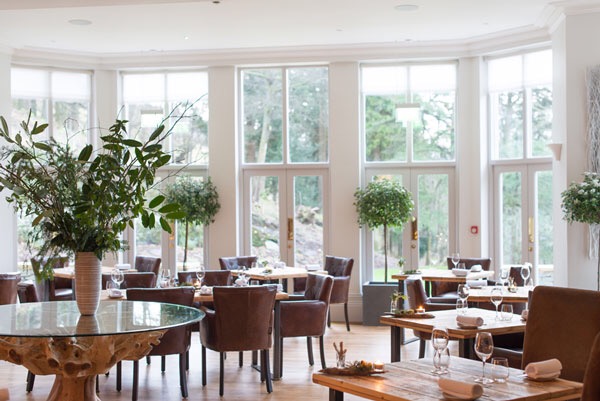 Former L’Enclume Chef and Head Forager Kevin Tickle Heads up the Kitchen at Forest SideForest Side has launched after an extensive 18 month long and four million pound renovation.

Forest Side offers a 20 bedroom, 50 cover restaurant with a bar and lounge set in a 19th-century Victorian hotel minutes from Grasmere in the Lake District, Cumbria.

Heading up the kitchen is Kevin Tickle, who was former sous chef and head forager at L’Enclume for eight years. He then undertook the head chef role at Rogan & Co for a further year, before he was approached by Andrew Wildsmith. Kevin’s menu will change daily according to produce available within the abundant 46 acres of forageable grounds and restored Victorian-walled kitchen garden.

Whilst the hotel and its grounds have undergone a complete transformation, Kevin Tickle has been busy curing, preserving, pickling, distilling and lacto-fermenting during the last year, as well as planting the extensive Victorian-walled kitchen garden with no less than 120 raised beds.
A 70 square metre heated greenhouse houses ingredients such as micro greens, grapes and peaches, and a further two 30 x 14 foot wide polytunnels have been installed to grow edible flowers including violas, nasturtiums and dianthus. Expect additional home grown produce such as beetroots, carrots, leeks, lovage mint, oyster leaf and oxalis to name but a few.
Forest Side’s daily changing eight course tasting or à la carte menu will be dependent on what Kevin has available within the grounds, but expect dishes such as Venison pastrami, smoked juniper yoghurt, swede, Old Winchester and pickled allium flowers; followed by West coast scallop, parsnip, duck prosciutto and mead. Additional dishes include Cumbrian plaice, conifer, mussels, salsify and alliums; and desserts such as Scorched pear, malt and homemade ginger beer.

The drinks menu features a predominantly biodynamic and organic wine list and various cocktail and mocktails will include plenty of home-grown ingredients such the Forest Side spruce spritz.

The restaurant, with its tall bay window occupying one wall, is decorated with muted tones of white, offering an airy, light feel. The tables have been made from Forest Side’s old floorboards and plenty of foliage decorates the room giving a warm and informal feel. The kitchen pass is open, offering guests a glimpse of Kevin Tickle and his team at work. Diners will also enjoy stunning views of the grounds, the forest bank and the fells beyond, giving a real sense of being a part of the Cumbrian landscape.

Forest Side is the third hotel from Wildsmith Hotels, a collection of three small and charming properties in the South Lake District, with excellent food at the heart of them all. Offering affordable luxury with a friendly and professional service, the other two properties are: The Ryebeck in Bowness-on-Windermere and Hipping Hall in Kirkby Lonsdale.

How The Asian Monsoon drove the evolution of mammals