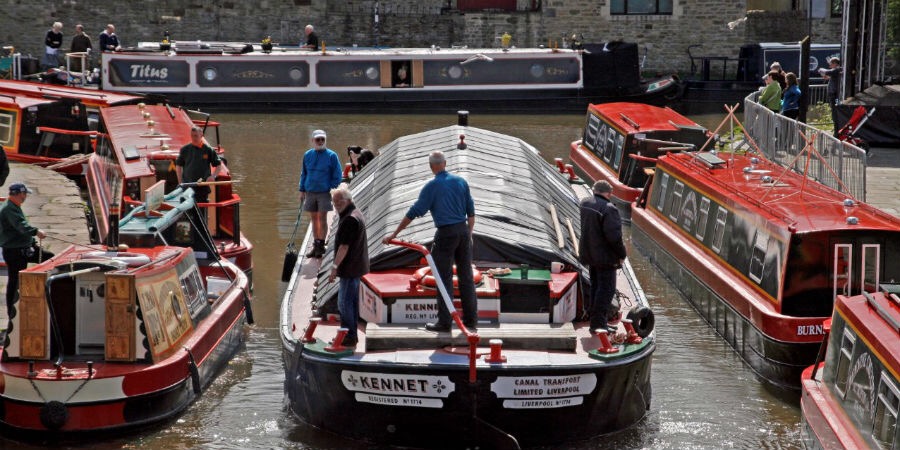 The Leeds & Liverpool Canal Bicentenary celebrations reach a high point this month as the historic short boat Kennet re-creates the inaugural ceremonial journey 127 miles across the Pennines from Leeds to Liverpool.

Organised by the Leeds & Liverpool Canal Society, which runs Kennet as an education boat, and supported by the Trust, the epic voyage will be a culmination of a year of festivities and celebrations in honour of the 200 anniversary of England’s longest canal.

Brass bands, 12 mayors, flotillas of boats, peels of church bells, hundreds of school children and crowds of well-wishers are expected to greet the boat as it makes its stately progress through Yorkshire, Lancashire and Merseyside, past mills and moorland, through Bingley, Skipton, Burnley, Blackburn, Chorley, Wigan, Burscough and some of the country’s most spectacular scenery.

Flotillas “decorated with flags and streamers”, accompanied by “hearty cheering of immense assemblage of spectators” greeted the original ceremonial boat journey in October 1816. That trip lasted only five days but this month the Canal Society crew will take a more leisurely pace so more people can celebrate in daylight hours, leaving Leeds on Saturday 15 October and arriving in Liverpool nine days later on Sunday 23 October.

Chantelle Seaborn, local waterway manager with the Trust, said: “This epic boat journey is a wonderful way to mark the 200th anniversary of one of the most significant waterways in Britain. The opening of the Leeds & Liverpool Canal played a key role in Britain’s Industrial Revolution and encouraged the development of the textile industries in Lancashire and West Yorkshire.

“Today there are fewer industries along its banks, but the canal still brings many benefits of leisure, tourism, nature and regeneration to the communities along its route. There is tremendous pride in our wonderful heritage and we are delighted so many towns, cities, schools and organisations have come forward to be part of this incredible long distance celebration.”

The original five day journey in 1816 represented a triumph of grit and determination for getting the job done. There were numerous debates about the exact route of the canal. Construction began in 1770 at either end and by 1777 the canal was open from Leeds to Gargrave and from Liverpool to Parbold. At this stage the money ran out and worked stopped until 1790. The route was then altered to take in the growing industrial towns of East Lancashire but it was not until 1816 that the last section between Wigan and Johnson’s Hillock, near Chorley, was finished, finally creating a trans-Pennine link between the two great cities.

In its heyday, the canal carried cotton, coal, wool, limestone, sugar and other vital commodities through the rapidly expanding industrial communities of Lancashire and Yorkshire. From the Second World War onwards, it suffered declining cargo traffic and narrowly escaped closure in the 1970s. Two hundred years on, the canal is still cherished but now as an oasis for wildlife, a thriving centre for tourism, recreation and leisure and a catalyst for regeneration.

The four horseman of the Apocolypse

Roll up for a unique carnival experience like no other