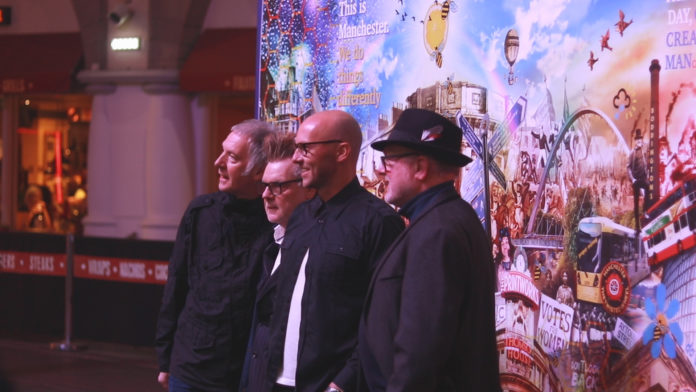 A nostalgic piece of artwork (5m wide by 2.4m high) created by Justin Eagleton, celebrating the city’s history was unveiled last night by Clint Boon at the Printwork. The mural will be placed on Dantzic Street for visitors to view from 21st October.

The mural includes references to a range of quirky references that will make every northerner smile, including Belle Vue Circus, Beetham Tower, the Royal Exchange, The Stone Roses, Oasis, Victoria Wood, Steve Coogan, Emmeline Pankhurst, Professor Brian Cox and Alan Turing along with many many more!

The mural, which took 12 months to piece together, is the creation of renowned artist Eagleton who described the artwork as, ‘A tribute to Manchester and everything about the City‘.

While there are familiar faces featured on the mural Eagleton decided to use some not as well known influential Mancunians to celebrate them hoping people who see the mural and be inspired to learn more.

Eagleston praised celebrity photographers Paul Wolfgang Webster, Ian Tilton, Jill Furmanovsky and Paul Husban who helped expend the project, which was initially intended to feature in the Printworks conference room. However, once the development of the piece began the decision was made to place it somewhere public.

Charity, Forever Manchester, has teamed up with the Printworks for the campaign, selling copies of the mural to raise awareness and funds for their cause, which supports grassroots community projects across Greater Manchester. The prints of the mural are available here.

Attendees were treated to music before seeing the unveiling… and of course, Forever Manchester mascot Captain Manchester was on hand at the event.

The large replica mural will ultimately be auctioned off to raise further money for the charity. Paul Howarth from the charity added, ‘The printworks have helped raise money for us over the years, a massive thanks to the artist and the photographers who contributed too.‘