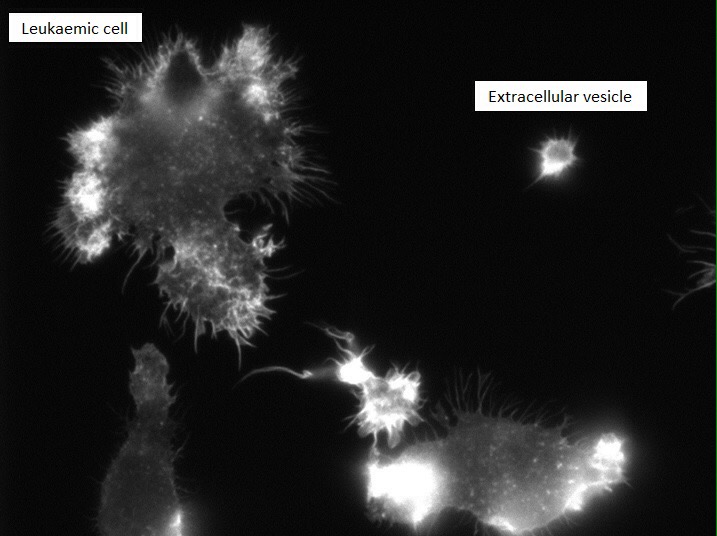 Researchers at The University of Manchester have unlocked the potential of a new test which could revolutionise the way doctors diagnose and monitor a common childhood Leukaemia.
Dr Suzanne Johnson says that cancerous acute lymphoblastic leukaemia cells produce and release special structures that can be traced in the blood.

The discovery could have major implications on the diagnosis, monitoring, drug delivery and treatment of childhood leukaemia.
Around 38,000 people of all ages, from children to adults, are diagnosed with blood cancers and related disorders every year in the UK. It is a complex disease area made up of 137 individual diseases. Some affect thousands of people, such as common forms of leukaemia, lymphoma and myeloma. Others affect only a handful. But together, blood cancers are the fifth most common form of cancer.

Dr Johnson publishes the research, which was led by Professor of Paediatric Oncology Vaskar Saha, in the leading journal Blood. This research received funding from the European Union’s Seventh Framework Programme for research, technological development, and demonstration (Grant agreement no. 278514 – IntReALL); a program grant from Cancer Research UK; and a Bloodwise project grant. V.S. is the recipient of an India Alliance Margdarshi Fellowship
Until recently, the ‘Extracellular Vesicles’, as they are known, were thought to be worthless debris. Dr Johnson investigated their presence in the plasma from bone marrow biopsies and discovered their ability to circulate in the blood using mice.
Though there is an 85 to 90% success rate in treatment, children must endure repeat bone marrow biopsies to assess the progress of treatment.
But the researchers hope this discovery might reduce the frequency of the painful procedures, which can also cause bruising, bleeding and infection.
Vesicles, which contain the protein actin and have identifiable characteristics of their parent cell, are typified by branching structures beautifully shown in images produced by the team.
Dr Johnson said: “Our discovery of Extracellular Vesicles could be a game changer in terms of the way we care for children with lymphoblastic leukaemia.
“Our research has shown that cancerous Leukaemia cells have the ability to package parts of themselves and then send these structure – vesicles – to anywhere in the body though the blood.

“That opens up a world of possibilities in terms of monitoring the progress of the disease and making diagnosis quickly and efficiently. They are also internalised by other cells and act as an effective route for cell communication.

“Now the challenge is to investigate whether other cancers produce and release these structures as well.”

Further down the road, the discovery could have implications on the way drugs are delivered to patients, explains to Dr Johnson, if we can find a way to combine them with the vesicles.

And the team also hope that the vesicles might provide individualised information about the tumours, eventually helping doctors to deliver personalised care.

She added: “What is amazing is that Vesicles were previously dismissed as mere debris from the cancerous cell, but we now realise this absolutely not the case. They are far more interesting than that!”