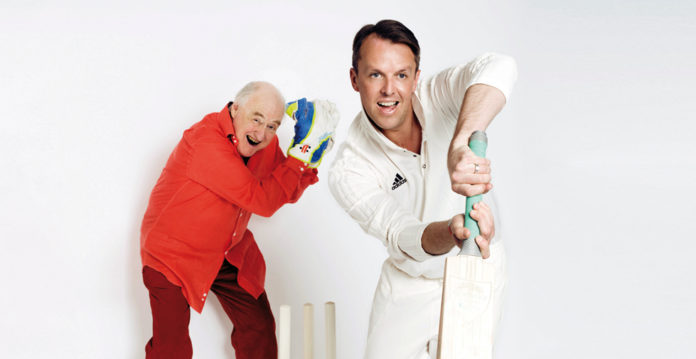 With Graeme hot off the dance floor and Henry’s quick wit, storytelling and sparkling personality in equally good shape, Dancing Down The Wicket is set to be a rip-roaring, belly laughing evening of not to be missed entertainment.

The delectable duo will delve behind the scenes of everyone’s favourite dancing show, hear about Henry’s latest retirement antics and of course share their cricketing reviews and insights on 2019 including the Cricket World Cup, The Ashes and plenty, plenty more.

Graeme Swann said: “What better way to celebrate the greatest ever summer of English cricket (hopefully!) than listening to the voice of cricket Henry Blofeld put his unique spin on things and me talk about coming an incredible 7th on Strictly!’’

Henry Blofeld said: “It will be great to have the old firm back in action – caught Blofeld, bowled Swann… What a way to go!’’

Graeme Swann retired from professional cricket in 2013 after an illustrious career that sees him lie seventh on the list of England’s all-time wicket-takers. He made his test debut in 2008 having broken into the England squad in 1999, played in three Ashes series wins and helped England become the number one test side in the world in 2011. In the same year, he became the top-ranked One Day International bowler and was part of the England side that clinched a first major world title in winning the 2010 World Twenty20.

Since 2014, Swanny has been a summariser for BBC Radio 5 Live’s Test Match Special. He was a regular on national television screens in 2018 as he reached the tenth week of Strictly Come Dancing with dance partner Oti Mabuse, sending the British public into raptures with some of his moves. On stage, Graeme has toured UK theatres twice with Henry Blofeld with their hit debut show The Great British Spin Off, which the pair took back on the road soon after due to phenomenal demand in The Great British Spin Off – The Second Innings.

Henry Blofeld retired from international cricket commentary in June 2017 following a hugely celebrated 50 years behind the microphone. He has since released best-selling autobiography Over and Out (published by Hodder and Stoughton in 2017), enjoyed a total sell-out live tour with 78 Retired in Spring 2018, resulting in an additional string of sell-out dates for Autumn 2018, presented a four-part series for Classic FM called Blowers Around Britain, appeared on Would I Lie to You? (BBC One) and even recorded a sleep story for Calm.com. Henry’s latest book, My A-Z of Cricket, is out on 3rd October 2019, published by Hodder & Stoughton.

Our ‘Dear Old Thing’s’ plummy tones are known and loved worldwide thanks to his extensive cricket commentary career on both television and radio, and he has commentated on some of the most iconic moments in cricket over the last half-century. Blowers is the longest serving member of the prestigious Test Match Special cricket commentary team, having joined the show in 1972. Between 1991 and 1994 he worked for Sky Television before returning to the BBC in 1994. His theatre credits include a series of one-man shows around the country, 78 Retired, An Evening with Blowers, and collaborations with John Bly and Peter Baxter including Blofeld and Baxter: Memories of Test Match Special and Rogues on the Road as well as The Great British Spin Off with Graeme Swann.

Tickets for Dancing Down The Wicket are on sale now at www.dancingdownthewicket.com

THE FROST FAIR -The Whitworth welcomes winter with a weekend of free events –...