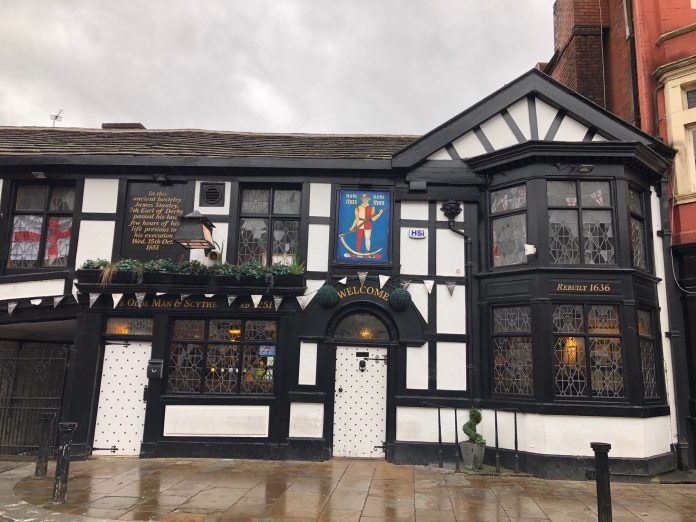 As the fourth oldest pub in Britain, Bolton’s Ye Olde Man and Scythe has a resident ghost, several spooky encounters, and some chilling CCTV footage.

Founded in 1251 it has now been named as one of the most haunted by pub company Ei Publican Partnerships. The pub which has recently undergone a £35k refurbishment was chosen from more than 4,500 buildings, alongside The Starving Rascal in Stourbridge and White Horse in Dover.

The most famous ghoulish occupant is said to be that of royalist James Stanley, Seventh Earl of Derby, whose family originally owned the inn. He led the Bolton Massacre in 1644 which resulted in the death of 1,600 people, and for this he was sentenced to death. He spent the last hours of his life in the pub before his beheading in 1651. The chair he sat on during that time still remains in the pub today, and according to some, so does he.

A series of eerie footage has shown ghostly encounters including flickering lights and a figure appearing at the bar in the early hours of the morning. The famous watering hole is said to haunted by at least 25 spirits which also includes a woman who reportedly hung herself in the cellar, an eight-year-old girl and a phantom dog.

Publican, Przemek Wisniewski, took ownership of the pub in June this year and admits he has been reluctant to live there due to its spooky goings on, but the paranormal activity does help to attract punters.

Przemek said: “The pub has seen a lot of tragedy over the years and has an interesting history which people from all over the world love to learn about. We’ve had visitors from America, Japan and most recently, Mexico and it just goes to show that people are intrigued by the pub’s history.”

The pub is running some spooky events in time for Halloween including marking the anniversary of James Stanley’s death on 17th October and for those brave enough to go in the run up to All Hallows’ Eve there will be seasonal beers on offer.

If you can’t make it to the pub, supernatural enthusiasts are being dared to take part in the Hobgoblin ‘Come to The Dark’ game which has a spooky quiz and plenty of prizes up for grabs.

Nick Light, Managing Director for Ei Publican Partnerships, said: “Ye Olde Man and Scythe is our oldest pub with 700 years of history and has some tremendous stories which has led to some ghostly sightings.

“As we head towards Halloween, we’ve identified our most haunted pubs for those that like to explore their spooky local landmarks and it’s clear to see why this one has topped this list.”

For those with a thirst for learning more about what is on the other side, Paranormal City Events are also hosting a ghost hunt at Ye Olde Man and Scythe on 6th December.