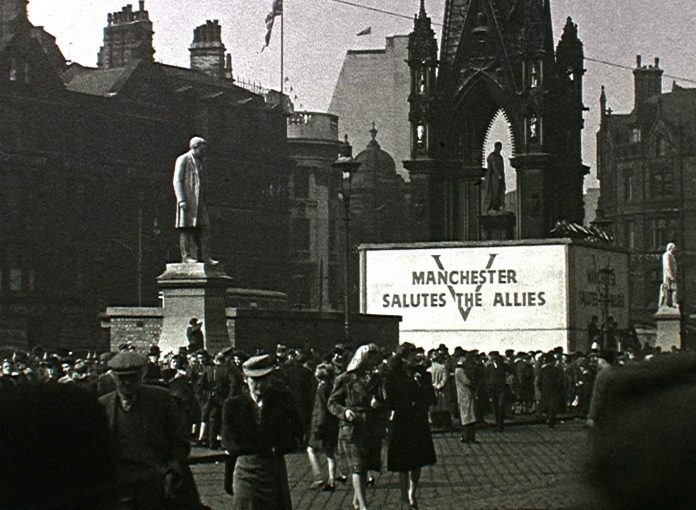 With most events planned for VE Day now cancelled or on hold, the North West Film Archive (NWFA) has joined the growing number of groups and organisations moving their commemorations online and into the virtual world.

VE Day – or Victory in Europe Day ­– commemorates the day on May 8, 1945 that prime minister Winston Churchill announced that Nazi Germany had surrendered to Allied forces.

The archive is helping various local groups and authorities to reach out to their communities as part of the revised VE Day celebrations, with a two-minute edit of some footage taken on the day around Manchester Town Hall and in Piccadilly Gardens.

The footage will be shared with schools and members of the Scout Association in the UK, who are now running online meetings for their members and holding activities on the theme of VE Day in the run up to the day.

It will also be seen on national and local news channels, including ITV and the BBC across the week.

The films include some classic home front scenes such as children ‘digging for victory’ at Elworth School Cheshire and actress Gracie Fields on a visit home to Rochdale.

The NWFA is based at Manchester Central Library which is temporarily closed, but the archive remains ‘open for business’ with its film catalogue and many of its films available online for everyone to explore, including staff members, students and alumni of the University, as well as the local community.