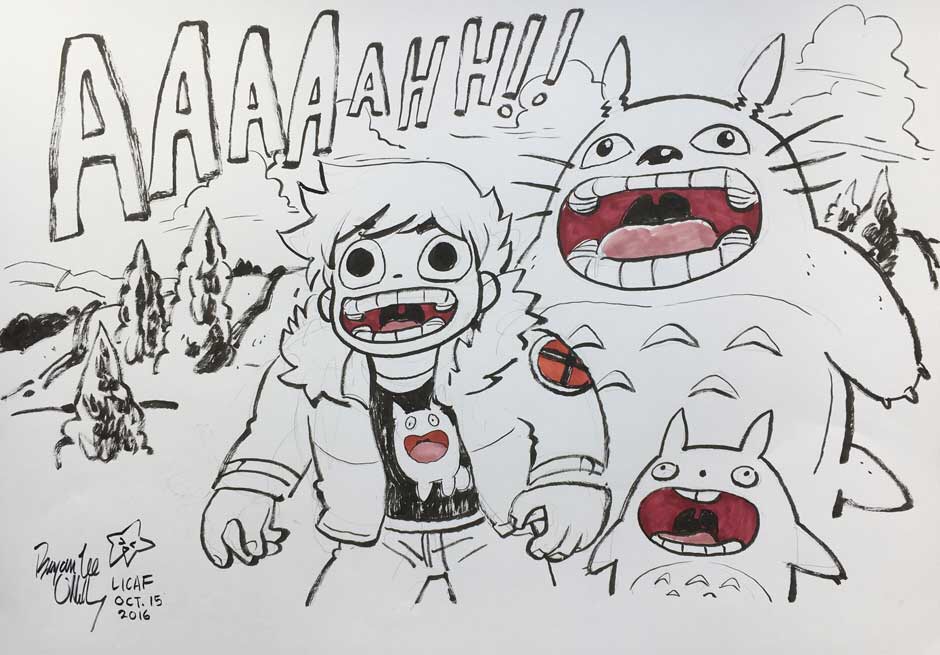 This year, the auction will take place online only, opening at 9.00am on Wednesday 23rd November 2016 on Proxibid. The catalogue is live online right now.

“Attending the festival this year made me feel proud to be a part of it,” says Festival patron Emma Vieceli, one of the contributing artists, who’s currently working on Back to the Future for IDW and BREAKS which will begin to appear in print with Soaring Penguin next year.

Emma is keen to support the Festival and was just one of many delighted by this year’s weekend-long gathering in Kendal.

“Everywhere I went I saw people smiling, enjoying themselves and generally embracing comics and comic art, specifically. As an artist myself, it always makes me happy see the form being appreciated, of course! But it was wonderful having the time to really take in the scope of what was on offer from peers and heroes at the festival.

“From watching entertaining debates about which cartoon giant we would get behind in a fight (Asterix, as it turns out), through giggling as blindfolded punters tried to hook ducks in the Knockabout Comics room, to feeling pride as a new Comics Laureate was named (Charlie Adlard made a wonderful speech about the importance comics play in the lives of young people, especially those who find it harder to read than others),
“I felt part of something special,” she enthuses, which is why she’s happy to provide art for this auction to help the Festival in 2017. I got to sit and talk in beautiful surroundings with creators, readers and innovators from Finland, Canada, Japan, the US, Spain, France and more; an international community who contribute to this industry, whether by making comics or by helping those comics get into the hands of the wonderful people who read them.
“The Lakes Festival works hard to gather that community and offer them a space to talk, share and teach, and I love it for that.”

• Bidding on items begins Wednesday 23rd November 2016 at 9.00 am GMT on Proxibid. View the auction and bid here

Round Britain trip proves to be a life-changer for Chester student.