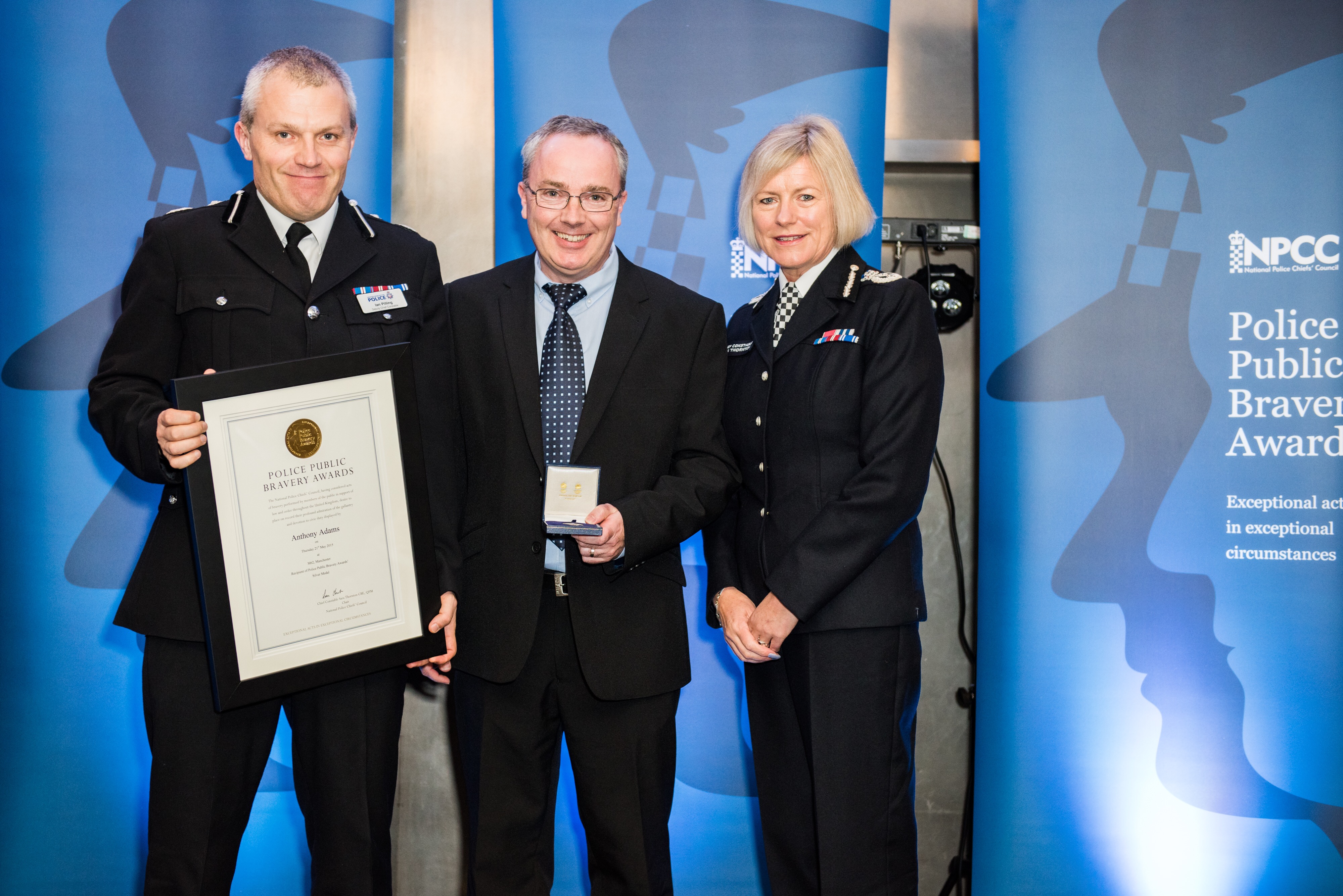 The Police Service honoured the bravery of six people from Greater Manchester at the National Police and Public Bravery Awards.
Tony Adams , Lily and Eva Barber, Jack and Olivia Maguire and Richard McClean from Greater Manchester were all honoured at the 51st annual NPCC Police Public Bravery Awards held on Tuesday (15th November) at the Radisson Blu Hotel in Bloomsbury, London.

Tony Adams, 49 from Lowton near Warrington, won a Silver medal at the awards which are sponsored by The Goldsmith’s Company while Lily, Eva, Jack, Olivia and Richard were all given certificates for their actions during difficult circumstances.

The awards recognise members of the public for actions, which support the police in preserving law and order. This year’s awards ceremony recognised the acts of 94 people for their courage and bravery.

The Greater Manchester Police Band also performed on the evening.

On Thursday 21st May 2015, a police pursuit came to a conclusion on a live lane on the M62, with the driver of the offending vehicle climbing out of the car and approaching PC Matt Picton’s police vehicle. A further occupant remained in the car. PC Picton was able to get the driver onto a grass verge, where he struggled to handcuff the subject as other members of the public drove around the incident.

Tony, a father of three boys, pulled in front of the incident, got out of his car and ran to help PC Picton, physically assisting in restraining the male allowing the officer to safely handcuff him. The nearest police back-up was some distance away, so Tony’s assistance was all the more significant in controlling a volatile and dangerous situation.

Tony put himself in harm’s way to help a lone officer while many others drove by, without the training or protective equipment that officers benefit from, while remaining calm and controlled.

Tony has also been awarded a Chief Constable’s Commendation for bravery during this incident.

Tony said: “I was honoured to receive the award, especially as at the time I didn’t feel that I was doing anything particularly brave. I was just happy to help out PC Matt Picton, and ensure the offender did not have the opportunity to flee across the motorway. The award ceremony in London was a very sobering experience hearing how so many members of the public had put themselves at risk, during very dangerous incidents, to protect others.

“We sometimes forget that Police Officers deal with serious incidents on a daily basis, often putting themselves in danger to protect the public. Since the original incident, a number of officers have told me how much they appreciate it when a member of the public does help their officers, even though it is not expected.”

“Each of those honoured put themselves in harm’s way to ensure the safety of others. They acted with bravery and public-spiritedness in a desperate moment and it’s an absolute honour to be able to recognise them in this way.”

Deputy Chief Constable Ian Pilling from GMP, who also attended the awards, added: “Congratulations to Tony and all the people who were awarded certificates. These are fantastic awards that recognise the truly remarkable things that people do to help others and it was an honour to be part of it.”

Unpaid carers are twice as likely as the general public to have relied on...