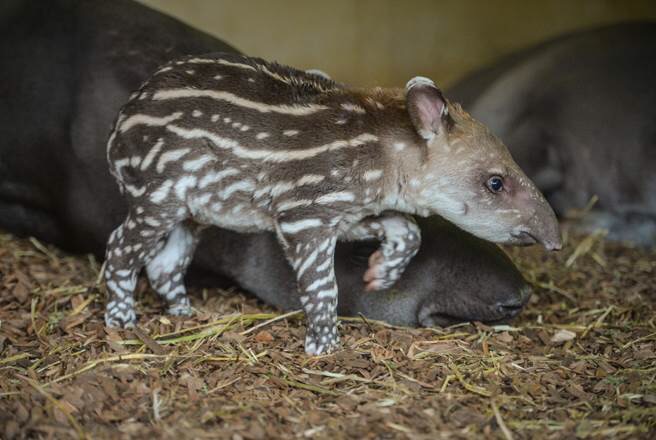 Keepers at Chester Zoo have announced the arrival of a rare Brazilian tapir.
The female calf, which has not yet been named, was born early in the morning on Saturday 5 December to experienced parents Jenny and Cuzco.

Weighing just a few kilograms, she is expected to more than double in size within just two to three weeks.

Young tapirs are born with spots and stripes all over their bodies, heads and legs but lose these patterns in the first year of their life.

“With her brown coat currently covered in white stripes and spots, our new tapir calf resembles a little humbug on legs at the moment. Lowland tapirs lose this patterning over time but, for a newborn, it’s a great form of camouflage as predators will often mistake young calves for specks of sunlight on the forest floor.

“At just a few days old she is tiny but tapirs grow very quickly and we expect she will double in weight in just a matter of weeks. She already has bundles of energy and is quite demanding on mum in particular, but Jenny is very experienced and knows exactly what to do.

“We hope that our new arrival will be another great ambassador for the species and their cousins in the wild who, sadly, fall victim to a number of devastating threats that has resulted in a huge loss of wildlife across South America.”

Brazilian, or lowland tapirs, are listed as vulnerable to extinction by the International Union for the Conservation of Nature’s (IUCN) red list of threatened species. They are either completely absent or severely depleted from much of their historic range in South America, with more than a 30% decline in the wild population over the last 30 years. Their main threats stem from habitat loss and huge hunting demands for its meat and its hide, which is used to make leather products.

The pitter patter of tiny trotters