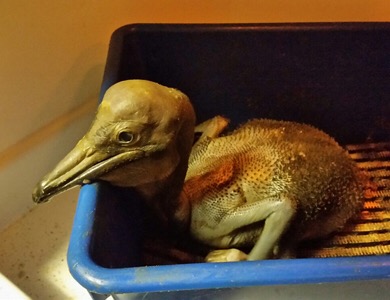 Bird keepers at Blackpool Zoo are feeling especially chirpy after welcoming the only Eastern White Pelican chick to be hatched in the UK since 2008, which will be the first ever to be hand-reared.

The occasion was made even grander as the tiny chick hatched just three hours prior to the birth of the Royal Princess. Excited keepers camped in the bird nursery for two days in anticipation of the very special bird and have been caring for it round the clock ever since.

Pelican eggs are rare and with only an eight per cent fertility rate, they are also very difficult to breed. So when Blackpool Zoo announced its first pelican egg, keepers waited with baited breath, treating it like Royalty!
Still unsure of the baby bird’s sex until it is old enough to undergo DNA testing, keepers have chosen the unisex name Charlie – after the beautiful new addition to the Royal Family.
Blackpool Zoo’s Spanish sister attraction Faunia in Madrid, also hatched an Eastern White Pelican on the exact same date and the two teams of keepers are speaking and sharing information everyday.

Johnpaul Houston, Assistant Head Keeper at Blackpool Zoo, said: “As the birth of the Royal baby got closer and closer we started to wonder if any of our animals would join Kate in labour, so you can imagine our excitement when Charlie hatched at 5.30am – just three hours before the Princess.

“As Eastern White Pelican breeding is so rare in the UK, we really are giving the chick VIP treatment and waiting on it hand and foot. As well as hand rearing, we are also giving Charlie 30 minutes UV exposure each day to help bone growth.
“It is the first time an Eastern White Pelican chick has hatched in the UK since 2008, the last one, called Cyril, was the country’s first that we can find and still lives here at Blackpool Zoo.
“Everyone at Blackpool Zoo would like to send huge congratulations to Kate, William and George on the new addition to their family.”
Keepers will continue to hand rear Charlie in the coming months and when the little one’s ready, Charlie will stay in a pen at the pelican beach where it can see the zoo’s nine other Eastern White Pelicans and be slowly introduced.
Eastern White Pelicans are the second largest species of pelican in the world and originate from southeast Europe, Asia and Africa. When adult sized, the birds have pure white feathers and their wingspan can grow to around 12 feet.